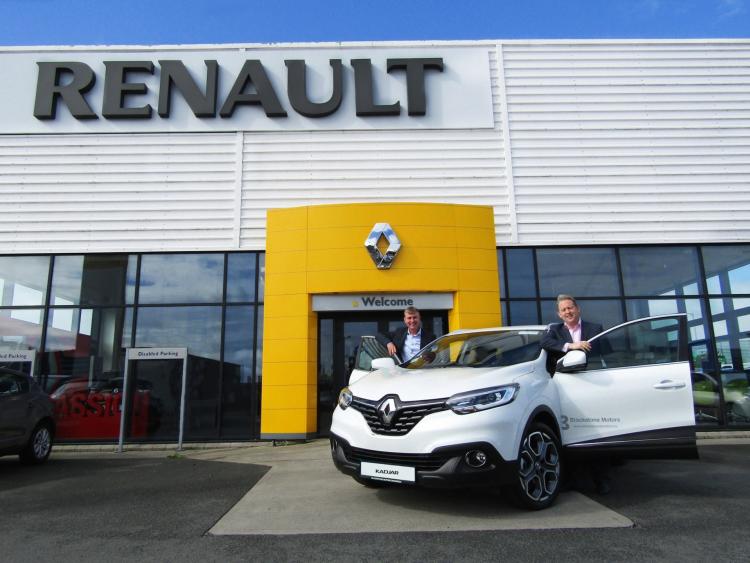 Louth's Blackstone Motors were named Renault Dealer of the Year at the manufacturer's annual awards.

"Myself and Donal Waters opened Blackstone Motors on the 1st of October in 2007 -there aren’t enough words to describe how excited and nervous we were - but we were determined to succeed," says Managing Director Noel Stewart.

"We were appointed as a main Renault Dealer  in August 2008 and promoted to a Regional Renault Dealer in December 2010. As a Regional Dealer for Renault and Dacia, we’re responsible for New Vehicle Sales, Parts Sales, After-Sales Performance, Brand Marketing and Dealer Network Standards for the North East region of Louth, Meath, Monaghan and Cavan."

"It’s hard to believe we accomplished so much in the first three short years of business, but we haven’t stopped there. We added Dacia (the sister brand of Renault) to our dealership in 2012 and saw our team grow from a team of four to a strong team of thirty over the last four years. Now (in 2016) we are focusing on the expansion of our business and reach into our region by opening Blackstone Motors Cavan in October 2016 and Blackstone Motors Dundalk in late 2017. This is an incredibly exciting time for us, and we are grateful for the opportunity to further develop our business."

"Since opening we have worked harder than we thought possible, and still treat every day like the first. It’s immensely satisfying to see that hard work pay off and be recognised by the motoring industry and the local community by winning some very prestigious awards such as:

"Our goal has always been to give every customer a high level of customer service. We pride ourselves on our personal approach in sales and aftersales and our ultimate aim is to achieve a high level of repeat business by developing a strong relationship with our customers. We know how daunting and difficult buying a car can be, and we strive to make it an easy, enjoyable and seamless process."