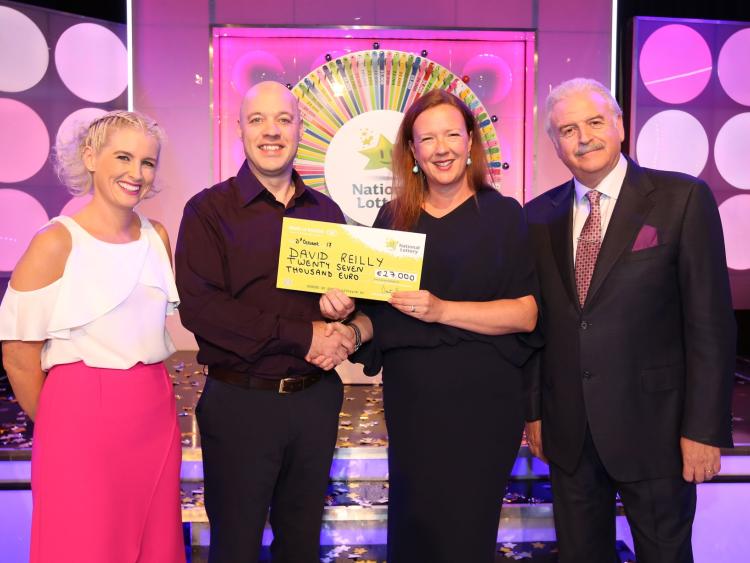 It has been a tough few months for Louth man David O’Reilly, who appeared on last Saturday’s (21st October) episode of National Lottery gameshow, Winning Streak, but the year is ending on a much better note for him and his family after he walked away from Winning Streak with the tidy sum of €27,000.

David (43), from Gleann Alainn, Tullyallen, Co. Louth, says that his appearance on the gameshow “could not have come at a better time” for himself and his family, who have had a tough few months because of Illness. David’s wife Jocelyn was very ill earlier this year after suffering a brain haemorrhage but has made a strong recovery and is feeling a lot better now.

David was supported by Jocelyn in the RTE studio audience along with their two boys, Callum (11) and Nathan (9). Coming from a large family, he wasn’t short of support on Saturday night. He now plans to end the year on a high note and bring the family on a well-deserved holiday.

David, who also works as a consultant engineer, said: “Business was tough during the recession but things have picked up and it is busy now. I will bring Jocelyn and the boys on a cruise holiday with my winnings.”

Winning Streak scratch cards also offer players the chance to win a once-in-a-lifetime luxury cruise for two worth €5,000. To enter the draw for the Luxury Cruise for two, entrants must collect the 3 letters S-E-A from the stub portion of their Winning Streak scratch card and send those into the National Lottery in the special grey stub envelope which are available from National Lottery retail sales agents. This week’s winner was Lorraine Lehane from Passage West, Co. Cork.