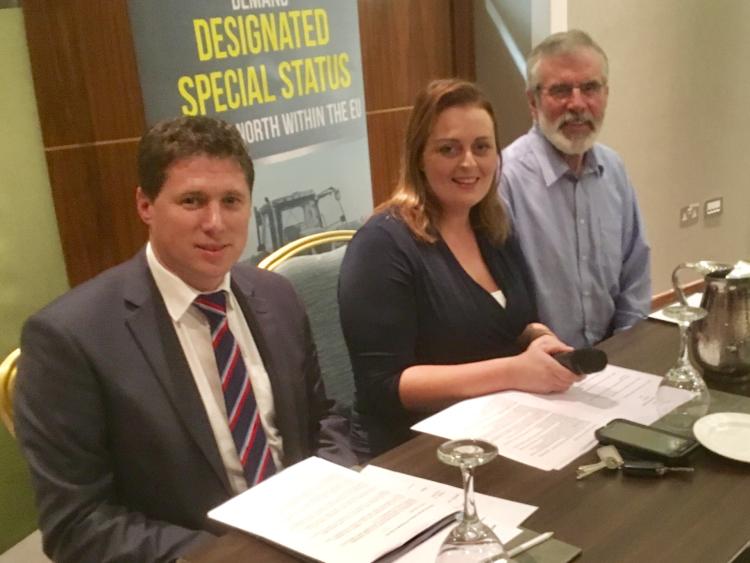 On Thursday evening over 100 people packed into a conference room in the Crowne Plaza in Dundalk to talk about Brexit and its implications especially for Louth and the border region.

One of the issues discussed at the conference related to trade negotiations with Britian.

Speaking at the conference in the Crowne Plaza on Thursday evening Louth TD Gerry Adams said:

“Any move toward trade negotiations between Britain and the EU should only be made in the context of the British having brought forward clear proposals on how it intends to ensure that the border remains free, open and seamless. Thus far they have failed to do this.

"This is especially important in light of last week’s internal report by the Revenue Commissioners which was leaked by RTE.

"It warned of the significant physical and economic impact Brexit will inflict on the border. It said that businesses will require special permits and face a huge increase in paperwork and bureaucracy.

"It also warned that cross border trade, especially in the areas of the agri-food sector, with its large volumes of trade annually in live animals, finished products and products requiring further processing, will be subject to customs controls.

"The report also warned that if there is no agreement on a trade deal then World Trade Organization (WTO) rules will apply. The likely impact of this is especially evident in the milk production sector.

"Currently, 91,000 Irish companies, many in the Louth and border counties, trade with Britain. Revenue predicts that after Brexit, their customs declarations will mean an 800% increase in volume.”

The Louth TD was scathing of the government’s response to all of this. Deputy Adams said:

“Last week’s government budget offered little succour for businesses under threat by Brexit. The spin claimed that the government was bringing forward a comprehensive package of Brexit response measures.

"But in the end what essentially was offered was loans. So businesses that will need investment to meet the challenge of Brexit and whose costs will almost certainly go up – are being offered loans and more debt.”

“Brexit is the most serious social, economic and political threat to the island of Ireland for a generation. The various policy positions unveiled by the British Government in recent months, including leaving the Customs Union, will cost jobs, and undermine the two economies on this island.

"Sinn Féin believes that the best way to against the damaging effects of Brexit is for the North to be accorded special status within the EU. This would help Louth and the border counties.

"The focus of the Irish government must be to ensure that all of Ireland remains a member of the Single Market and the Common Travel area, that EU funding streams can continue to be accessed, that the rights of Irish citizens in the north are protected and that trading arrangements, north and south and between Ireland and Britain are secure.

"This is crucial if the two economies on the island of Ireland are to be protected.”