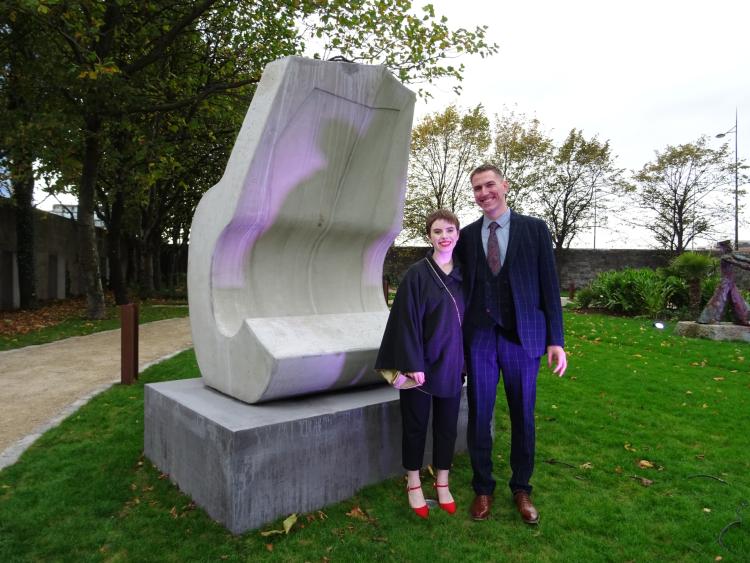 The permanent sculpture was part of the opening ceremony of the regenerated Dublin Port by the Lord Mayor of Dublin Mícheál MacDonncha in the presence of An Taoiseach Leo Varadkar.

Eimear began work on the largescale public sculpture while on a graduate residency in Fire Station Artists’ Studios’, Dublin. The 5-tonne concrete sculpture she produced is entitled ‘Drop’.

For this work Eimear built a robust wooden mould in which the concrete was cast in.‘Drop’ is a culmination of Eimear Murphy’s on-going art practice. In her smaller sculptures she combines found industrial materials (usually timber and glass) with concrete, through a complex mould-making process.

She is interested in testing the limits of the materials she uses.

Eimear (24) was born in Dromiskin and attended St. Vincent’s Secondary school where she first began to pursue art. There she won the Bank of Ireland Student of the Year for Art 2010 and the JP MacManus All Ireland Scholarship 2011 which allowed her to study at the National Collage of Art and Design, Dublin, graduating with a 1st Class Honours.

Recent group shows include LACUNA, Taylor Gallery, Dublin Veins, Molesworth Gallery, Dublin In Search of Place, An Tain, Dundalk; In 2015 she received Fire Station Artists’ Studios’ Graduate Award and where completed this major commission for Dublin Port Company. Eimear Murphy’s works are held in the collections of The Office of Public Works and of Dublin Port Company.

The evening began with speeches from Lucy McCaffrey, chair of Dublin Port company, along with CEO Eamonn O’Reilly. Leo Varadker then spoke and Lord Mayor of Dublin Mícheál MacDonncha declared the Port opened. Music followed into the evening with acts such as Damien Dempsey, Lisa O’Neill and Dubliner John Sheahan.