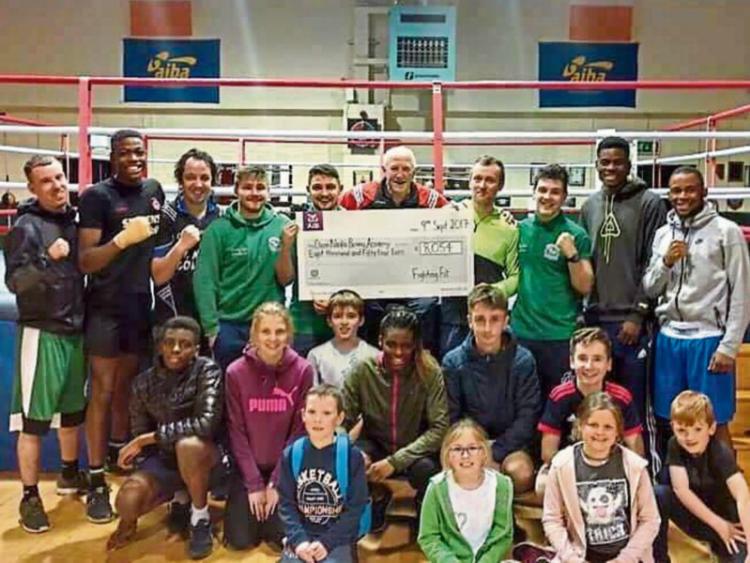 This milestone has also coincided with the gym's two year anniversary of opening in our own facility.

Members of the gym undertook an intensive 10 week training course learning everything they needed to know about the sport to get into the ring and fight competitively. Blood, sweat and tears were shed over the course of the training camp with only the strong surviving and making it to the very end; and what a night it was.

The event was a huge success with over 400 people turning out on the night to support their friends and family who were competing. The atmosphere was electric and the boxers fought their hearts out. They left it all in the ring and showed a great display of true sportsmanship.

Over €8,000 was raised in total for the club where it all began for Stephen Mulligan owner and head coach at Fighting Fit Gym. He and his two brothers Chris and Brandon who are also both coaches at Fighting Fit; were introduced to the sport by local men Hugh Mc Mahon and Jim O’Neill.

They fought and competed nationally and internationally for Clann Naofa over the years and the club and their coaches instilled in them the drive and determination to succeed and believe in themselves.

Stephen Mulligan said, “We were privileged to be given the opportunity to raise funds for Clann Naofa. The club where it all began for myself and Fighting Fit.

“They gave me the chance to take a leap of faith with my first boxercise class which has since evolved over the years into the gym and community it is today. Clann Naofa’s motto is 'Once a clann, always a clann' and with Fighting Fit we strived to emulate the same feeling of belonging and community for our members; and it has proven to be a success. I want to thank Hugh, Jim and all of the coaches and boxers of Clann Naofa for helping us to give back to this special club which holds a dear place in our hearts.”

The gyms donation coincides with Fighting Fit’s two-year anniversary in their own facility and was a great way to mark the occasion. The gym has gone from success to success in recent years and continues to grow. Stephen said, “It’s hard to believe that we went from just 2 boxercise classes per week to now offering over 45 workouts per week. We couldn’t have done it without the helping hand from Clann Naofa which gave us the start to build and grow our brand. A huge thank you to every single person involved in the event, we couldn’t have done it without our great community banding together. The funds raised will make a big difference for the club”.

This latest donation brings the total raised for clubs at charities by Fighting Fit members to over €20,000.