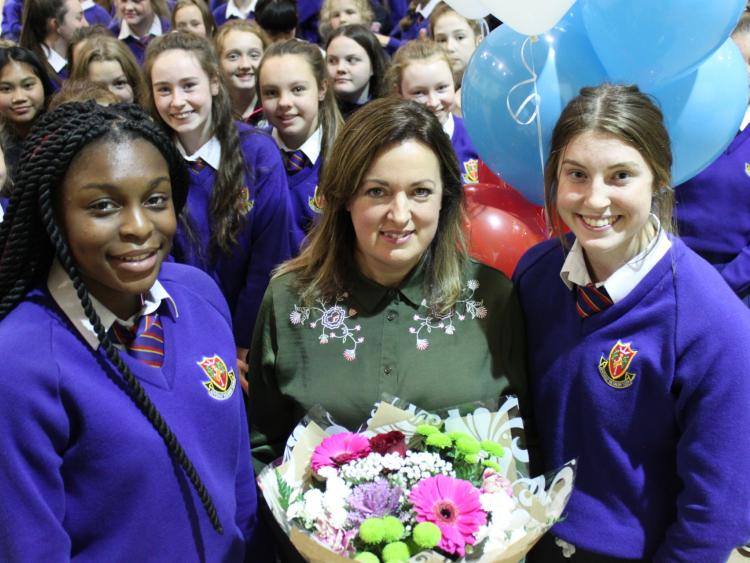 There were lots of positive vibes in St.Vincent's school last week with the official launch of the upcoming 5km run.
Students and staff gathered together as former Operation Transformation participant Yvonne Keenan Ross spoke candidly about her weight loss journey as part of the popular RTE programme.
She described her initial doubts and hesitation when applying for the series which sees five candidates follow a healthy eating plan and fitness regime, which also included the weekly Park Run.
"I was particularly concerned about the exercise and fitness part of the show, as I had previously done very little activity, and found walking difficult when I started."
However she began to see results within a matter of weeks and now sees exercise as a vital part of her life. She encouraged students to try to build activity into their everyday lives, even if it's only walking for 30 minutes a few times a week and stressed the importance of keeping fit for health and mental well-being.

Patience Jumbo-Gula and Kate O'Connor both achieved European success this summer and they too encouraged the girls to get off their sofas and get involved in the event.
Patience put in a phenomenal performance in July when she ran a time of 11.59 seconds to win a bronze medal at the European Youth Olympic Festival in Hungary.

Meanwhile Kate finished 8th in the heptathlon, and set a new youth record in doing so. She was the youngest competitor in the whole competition aged only 16.
They have both represented the school many times at Leinster and National level and are certainly an inspiration to younger students who wish to get involved in sports.
Head girls Aoife McGeough and Amy O'Donoghue also encouraged the girls to eat healthy and to 'make good choices' each day, particularly when choosing school lunches, remarking on the impact this can have on performance in school and concentration levels.

Principal Deirdre Matthews thanked Margaret Gamble and the Parents' Council for their hard work and dedication in organising this year's run which take place on Sunday 22nd October, leaving from the school gym.
After the huge success of last year's inaugural event they are hoping for another fun-filled fundraiser, details of which can be found on the school website.