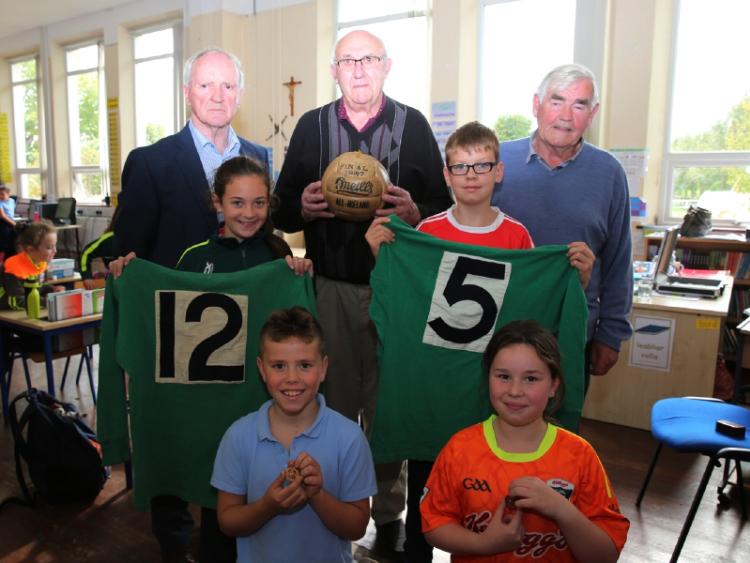 The staff, parents and pupils of Muchgrange National School, Cooley were delighted to welcome two members of the 1957 Louth team, Frank Lynch and Patsy Coleman to their school last week.

It has been 60 years since Louth played Cork in Croke Park and won the All-Ireland Football Final, proudly winning the Sam Maguire trophy. It was referred to as the ‘Biggest County vs the Smallest County’ with both teams playing in their provincial colours. The determination of the players and unwavering leadership of manager, Jim ‘Sogger’ Quigley ensured a place in GAA history for this remarkable team. 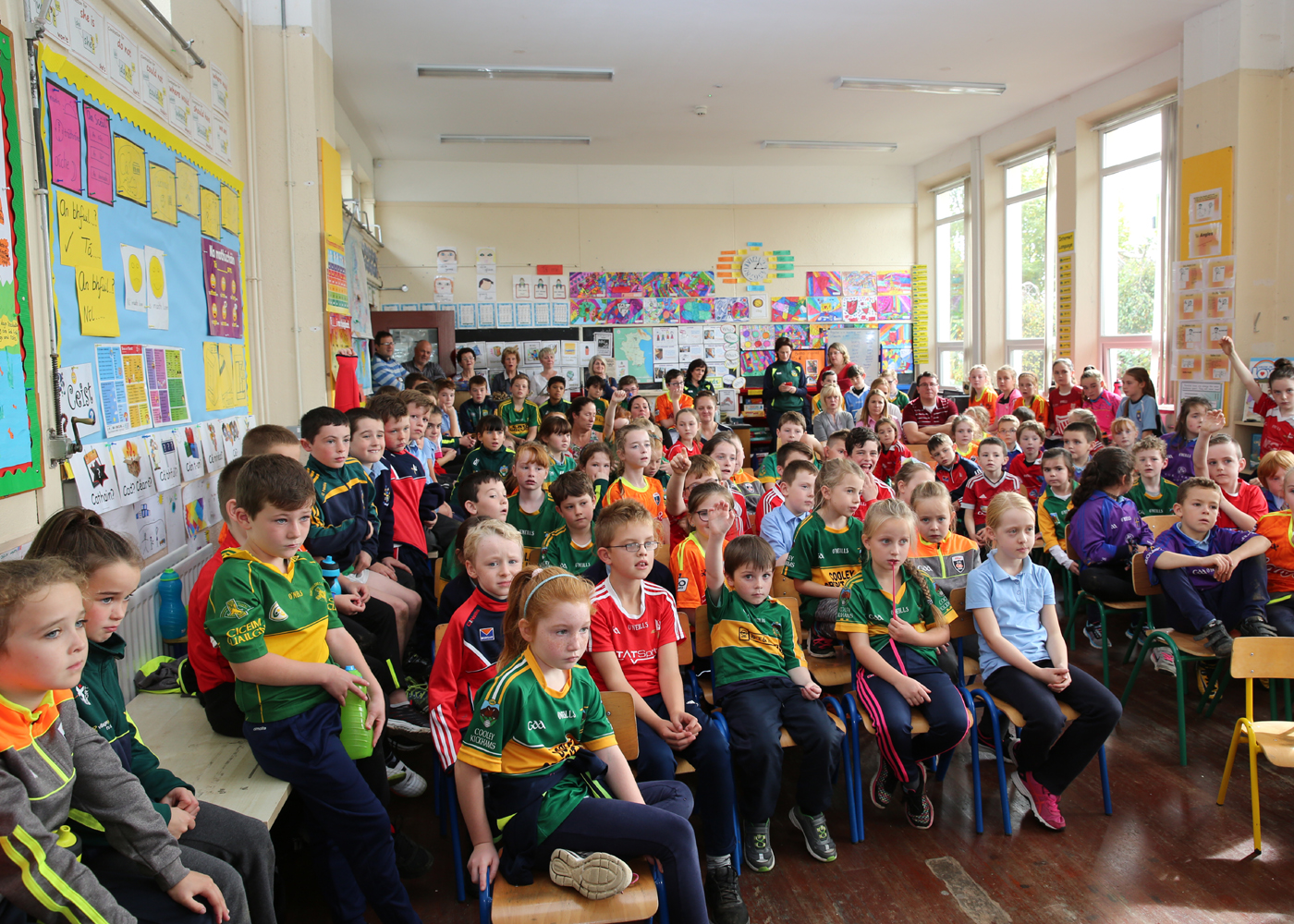 Aoibheann Duffy, Principal of Muchgrange NS welcomed Frank Lynch and Patsy Coleman, introducing them to parents and grandparents of the community. Many had their own stories of that memorable day. The children prepared a Question and Answer session for Frank and Patsy, asking how they trained prior to the ‘Big Day’, how they felt leading up to the match, and what it was like to hold the Sam Maguire trophy.

Patsy showed the children the pig-skinned football and explained how heavy it was compared to present day footballs. Frank explained how his football boots were made with a steel bar through the upper part to protect their feet as they kicked the ball. Patsy talked about training early every morning with a bag full of sand on his shoulders as he ran.

As a half-back he had to be ready for the attacking player as in those days you could score a goal by putting the defender over the goal-line, ball and all.

The children knew that Frank was the youngest member of the team and wondered if he was nervous as he lined up behind the Artane band. Of course he was apprehensive but he had great mentors looking out for him, particularly Tom Conlon and Jimmy McDonnell. He asked the children to remember Jimmy in their prayers and told them that both players had lost in the final against Mayo in 1950 and they weren’t prepared to do the same in 1957.

Questions from younger children were amusing but enlightening as it showed a bygone era where players would sing ‘Faith of Our Fathers’ before the match, watch the Bishop of Cork throw in the ball and drink tea during the ten minute halftime interval. The children were eager to know if either man had scored.

Patsy explained that as a half-back his role was in defence whereas Frank didn’t get the chance to score unfortunately. However, he was fouled on a few occasions and the free kicks resulted in a few scores. The excitement was palpable when Séan Cunningham scored the winning goal and gave Louth their two point lead.

A poignant question was ‘Did you have fun?’ and it was obvious from the banter between Patsy and Frank and their wonderful memories and stories that even though it was hard, they did have their fair share of fun. The team were invited to New York in 1958 for a three-week trip and were met by many Louth people who had emigrated to the ‘Big Apple’.

This day will be remembered by the children for many years and the highlight for many was touching the old-fashioned knitted green jerseys of Louth and inspecting the medals and the Gaelic football used on the day. Séan Thornton, Fifth Class asked: ‘“When will Louth win their next All-Ireland Final?” Frank replied: “With a name like yours, you should be able to do something about it. That’s up to you now.”

Let’s hope this day will inspire the children to aspire to greatness.