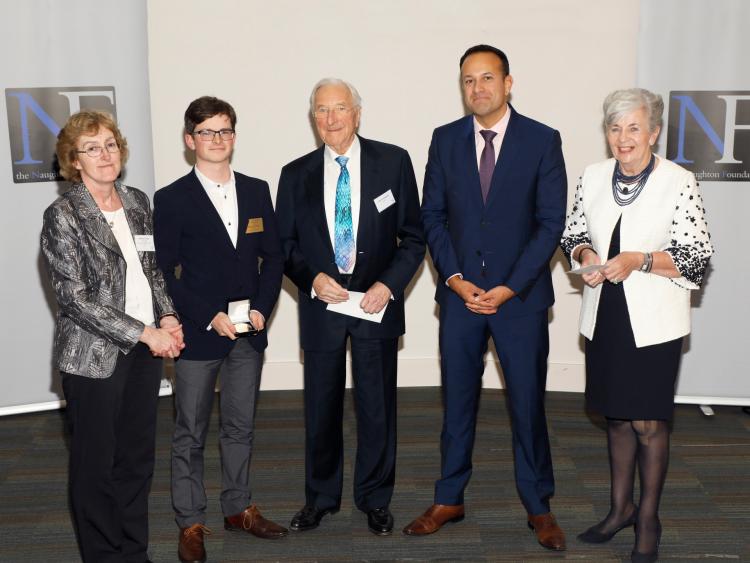 Harry has also accepted a place at National University of Ireland, Galway studying Engineering. Supporting academic and innovative excellence in Irish students, this Scholarship Award is an investment in the future of Ireland's reputation as a country with outstanding graduates.  In 2008 the scheme started in 3 counties and has continued to expand annually to become the nationwide program it is today.

Since its establishment in 2008 Naughton Foundation Scholarships worth over €4million have been presented to 175 remarkable young people in the fields of science, engineering and technology in publicly funded third level institutions in Ireland, north and south.

On Saturday, September 23rd 2017, 36 new Scholars joined this illustrious and celebrated list as the Naughton Foundation honoured a further 36 exceptional Irish students by awarding them third level scholarships towards their studies in the areas of engineering, science and technology.

Speaking about the growth of the foundation over the past ten years, the Naughton’s commented: “Ten years ago we envisaged a small scholarship program to help support local students studying the STEM subjects. We never imagined this group of over 200 students and alumni nationwide who are connected across the universities and STEM disciplines and we couldn’t be more proud of the unique community they are developing," stated Mrs Carmel Naughton

“Our reason for starting this program was to help young students in what were then seen as difficult and unattractive subject areas.  When we meet these young researchers, engineers and mathematicians I am very happy knowing that we have invested in Ireland’s wealth creators of the future", added Martin Naughton

Harry’s former secondary school, De La Salle College, Dundalk, was also presented with a prize of €1,000 towards their school’s science facilities, for their support of these students. More than 140 schools have benefited from this prize to date with some schools receiving it on more than one occasion.

This year sees the Naughton Foundation also invest further in ‘Science in a Box’ – STEM classes for Primary Schools. Steam Education Limited was set up in Cork in 2014 and devised ‘Science in a Box’ in an effort to teach a fun and engaging science program to children in primary school with new innovative materials.  Outreach teams comprising PhD students from Trinity College Dublin and University College Cork are involved in the delivery of the program.  The program runs for sixth class pupils for 25 weeks of the primary school year with PhD students spending one hour each week co-teaching with the class teacher, a specific aspect of the science curriculum.  For 2017-18, The Naughton Foundation is delighted to continue its support of this program for 25 sixth classes in the Dublin, Meath and Louth region.  ‘Science in a Box’ was also presented with a cheque on the evening of 23rd  September.