Restoration of the Boyne Viaduct 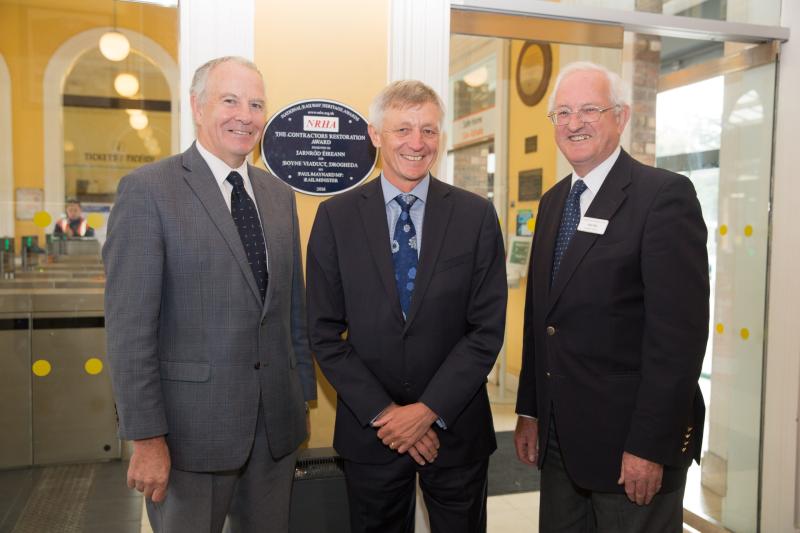 A plaque was unveiled today at McBride Station, Drogheda to mark the Railway Heritage award won by Iarnród Éireann for their restoration of the Boyne Viaduct.

The ceremony was attended by the judging panel of the Railway Heritage Awards and Iarnród staff.

A significant refurbishment, the project involved the installation of a new drainage system to capture and remove rainwater, steelwork repairs to replace sections of the bridge’s steel infrastructure and the relaying of track work over the viaduct itself. The old paintwork covering the viaduct has been removed and replaced with a more suitable and modern protective paint system which will help to safeguard the stonework over many years.

The EU-funded refurbishment of the Boyne Viaduct, Drogheda won the Historic Structures Restoration Award at the Railway Heritage Awards, presented at a ceremony in Merchant Taylors’ Hall in London in December last

Speaking the event Iarnród Éireann, Chief Executive said: David Franks said: “We are all very proud of the work carried out by our engineering team. Huge work and commitment went into the restoration of the Viaduct. And to see that recognised by the National Railway Heritage Awards is immensely gratifying. I am delighted that a permeant recognition of the work is being installed in the station today.”