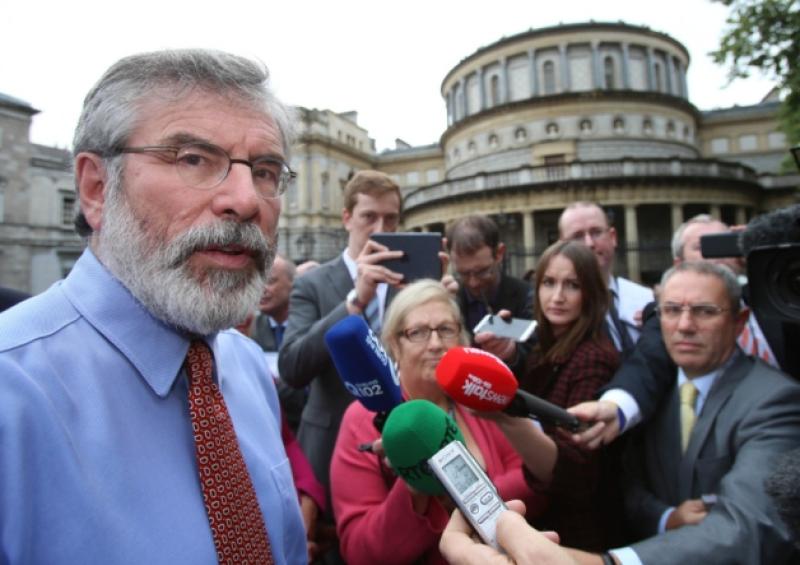 Louth TD Gerry Adams has dismissed claims his party has a problem with "bully boy politics”, noting that infighting was "part of the human condition".

Mr Adams was speaking after Limerick councillor Lisa Marie Sheehy (23) resigned amid claims of bullying in the party.

“I regret anyone leaving the party, but it is a troubling issue that some of these folks make very serious accusations which very, very unfair,” Mr Adams told RTE.

Ms Sheehy said she was "plotted against" and “pushed out of the party” by members who "tried to break her down".

Ms Sheehy said she made a complaint to party organisers recently in relation to her alleged mistreatment and “in regards to incidents that occurred at official meetings”.

She says an investigation was launched, which she likened to a “joke”. It’s understood the Sinn Féin-led investigation found “no evidence” of wrongdoing.

However, Mr Adams dismissed these claims, saying that it was “part of the human condition.”

“We don’t have a culture of bullying, every party, every association every organisation ends up with these localised disputes and arguments.

“Unfortunately part of the human condition is that people fight with each other,” Said Mr Adams.

Ms Sheehy consulted with other councillors who have made similar allegations and decided to step down.

"I cannot stand behind a party that does not take its memberships’ valid concerns seriously. If we look back at the people who have left the party or decided not to run for re-election due to bullying within the party it's disheartening and disgraceful and Sinn Fein has not learned its lesson,” she said.

"I have no respect for the party anymore as I have been undermined, bullied and humiliated. Since I have been elected I have tried to fulfil my duty as a public representative to the best of my ability and during that time I have been consistently and frequently belittled by party members and after seeing a number of other members wronged by the party and nothing of substance being done about it I could not stay any longer".

She will now continue to serve as a in an independent councillor.

Meanwhile, when questioned whether he will lead his party in the next general election, Gerry Adams refused to give a clear answer but says his party wants to “change the system.”

He said he has no plans to step down as leader of the party, as long as the members of his party continue to support him.
“I know precisely, God when I am going to go," he said.

“I will go if I’m elected, and then I will outline with others the next step in this process."

The TD for Co Louth said it is not just him that makes decisions, and Sinn Fein must define their future as a collective group.
“A group of us, more than me, have grown Sinn Fein from a small protest to a very electable party.

“There’s time for , you have to keep bringing forward new leaderships, developing the party and making it fit for purpose,” said Mr Adams.

Speaking on collaborating with other parties, he criticised how they have dealt with issues like the homelessness crisis, garda scandals, and the current Brexit negotiations.

“I have no great desire, and I don’t think anyone in Sinn Fein has to be in government with Simon Harris or indeed Micheál Martin, or the rest of them, given the mess they have made.

“But we aren’t greatly honoured to in government with the DUP, but we do that because it’s for the greater good,” he said.

Outlining his parties aims, should they gain power in the next election, Cllr Adams said;

“We don’t want to be part of the system, we want to change the system.”

Mr Adams was also questioned on the timing of his calls for a united Ireland, with Brexit negotiations so tense at the moment.

Mr Adams was also questioned on his view that another 500,000 false breath tests were taken by Síochána, on top of the million false tests already discovered.

“It’s astonishing, there are two issues here, one regarding competence and accountability,” said Mr Adams.

The Sinn Fein leader questioned the lack of accountability by the commissioner.

“If you go into Dunne Stores and steal something you will end up in court, but if you are part of the elite, part of the upper echelons, there is no accountability, the Taoiseach should act and Noreen O’ Sullivan should go,” he said.