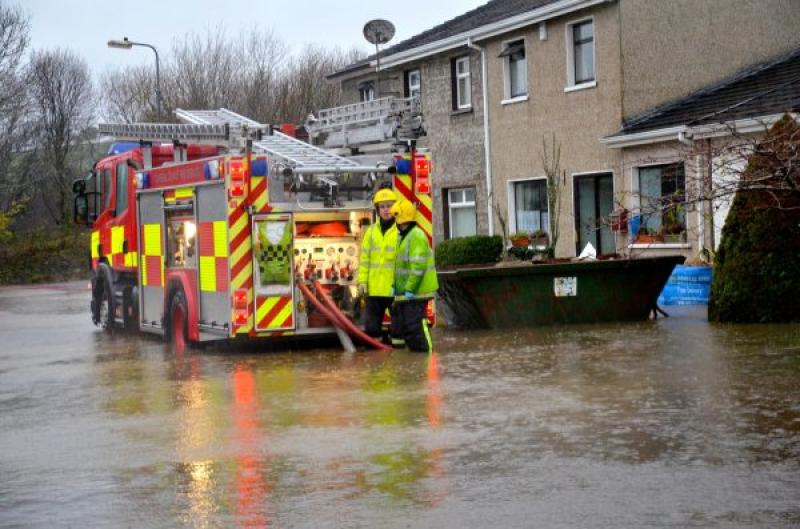 Former town council chairman Eamonn O’Boyle has warned of the increased flood risk being posed to Dundalk, dubbing it “a nightmare waiting to happen”.

O’Boyle was speaking in the wake of a serious spate of flooding in the north-west, with over 100 Donegal families left in need of emergency funding and accommodation, after a month’s worth of rain fell in just a few hours.

The flash floods also saw roads uplifted and farmland ruined across the region, with the army having since been sent in to aid relief efforts.

The former town councillor is now warning that a lack of maintenance of flood prevention infrastructure in Dundalk, coupled with a general sense of “apathy” among local authorities, leaves the town vulnerable to similar problems in the future.

“The devastation which was caused last week, by excessively heavy rain not being drained to the sea quickly enough, is a stark reminder to Dundalk residents that this type of ‘once in a hundred year’s event’ can happen at any time,” warned O’Boyle. “In essence, fluvial flooding is caused by inadequate rainwater runoff infrastructure. Without even factoring in global warming and consequent polar icecap melting, the flooding to a depth of several feet of all the land which was reclaimed from the tidal reaches of Dundalk Bay is overdue to occur.

“During the late 1720s, Lord Limerick of the Roden family constructed an earthen embankment from near Soldiers Point to the , Blackrock, thereby reclaiming almost 1,500 acres of land from the bay, which quickly became productive farmland.

“The last time this reclaimed land was flooded by the tide to a depth of several feet (in 1953) nobody passed many because the land was still farmland and drained completely to the bay in a couple of days, causing little damage.

“However, since 1953 we have built 3,500 homes and business premises on this formerly reclaimed farmland and the Lord Limerick Earthen Embankment is now almost seventy years older (without any maintenance) so it’s now an appreciably less sturdy sea-defence than it was in 1953.

“When another tidal surge occurs due to another alignment of malign weather conditions, the damage will no longer be but will cause hundreds of millions worth of structural damage as well as incalculable human misery and deprivation to the occupiers of the homes and business premises.

“I, during my time as a Dundalk Town Councillor, serving as Vice-Chairperson and ultimately as Chair, have been trying in vain to have this situation addressed by our local authority for well over a decade by, for example, seeking support from my council colleagues for a flood-risk mitigation committee to be established to try to help protect ourselves from this impending disaster.

“But regrettably, I have been singularly unable to secure the necessary support from either my fellow councillors or from our senior management. It was as if the matter wasn’t being treated seriously.

“I first raised it over a decade ago, setting forth a number of motions and reports. An OPW (Office of Public Works) report was published this year after I first made the submission in 2009-10, and it describes Dundalk as ‘in severe risk’ should a flood occur.”

In global terms, US government scientists have warned of even more sea level rises by century’s end than was previously estimated, this due to rapid ice sheet melting at the poles.

O’Boyle, for his part, says more needs to be done to safeguard the town going forward.

“Local authorities need to look seriously at reinforcing embankments around the region, with certain areas seen to be at particular risk.

A report in 2004 identified several thousand local homes as being susceptible in the event of , but the increasingly built-up nature of the town in the intervening years has served to exacerbate the issue.

“I’ve witnessed first-hand instances of flooding from Pearse Park through to Blackrock, and one presumes the entire Point Road would be in danger.

“From my perspective, though, there’s simply not enough regard for the seriousness of the threat.

”Even the lack of attention insofar as storm gullies around the town speaks volumes, with the majority of them clogged up and under-maintained.

“We shouldn’t have to wait for something to happen before we take remedial action, our officials need to be on the front foot in dealing with these issues and avail of the financial support that’s there.

“What always angered me most during my time in the council was that, after spending untold sums of taxpayer money on reports into various issues, hardly a single red cent was spent to alleviate the problems that were found.

“As things stand, the flood threat to Dundalk is a nightmare waiting to happen, and we need to be proactive in tackling it, not reactive.”