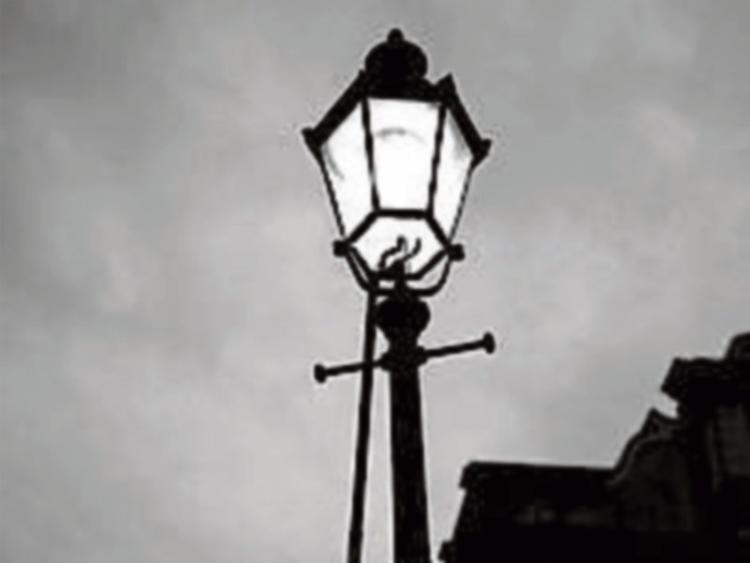 Street lighting on dark winter nights is a thing we very much take for granted these days but even within living memory it was something which could not be taken for granted. I am sure that there was still many people still around who can remember when the Town lighting was turned off at 11 p.m. and not switched on again until the early workers were making their way through the street at around 6 p.m.

This was during the Second World Wartime Emergency which lasted from this time of year in 1939 until sometime in 1946. If you were born during that period, you probably only have vague memories for the inky blackness outside your home at midnight. I can remember the excitement in our home when my brother got a large electric torch as a Christmas present. The pillar of light that emerged from it was something that fired my childish imagination and made me think that it might be possible to climb up it into an unknown country.

Another thing I can recall were the small circles of light cast on the roadway by the hooded electric light lamps. There was a black ring around those pools of light and the light did not illuminate the areas beyond their shadow; the result was that there were islands of darkness in the streets and roads where anything might be lurking. Was it any wonder then that schoolchildren of those days really loved the time year from mid-May until around August 15 when there would be little or no complete darkness. If you were a teenager then and had your parents' permission, you could play outside until it was bedtime! Remember there was no television then and few even had radios, (or wireless’ as we used to call them even though they had a lot of wires). The games you could play depended very much on a source of light.

Thinking about those memories brought me back to considering what it must have been like in Dundalk in a time when there was no street lights at all and house were lit at night by candles or oil lamps. These thoughts were conjured up in my mind by an article I read recently in one of the later Tempests' Annual published by the Old Dundalk Society. It was written by the late Arthur Curran of Mulholland Avenue who was the first President of the Society back in 1964. This very interesting article was called 'How the Light came to Dundalk' and was mainly about the establishment of the Gas Company works in Bridge Street. Padriac ua Dubhthaigh in his 'Book of Dundalk' states 'The people of the Town were able to turn on gas jets as early as 1817 --- only ten years later than those of London.' Artie Curran, however, writes 'In the autumn of 1837 gaslight was seen for the first time in Dundalk. On the twenty-eighth of August, 1837 of that year, in some private houses and shops, the new source of illumination took the place of the candle and the oil-lamp.

On the following day the Town Commissioners entered into a contract with the newly formed “Dundalk Gas Light Company Limited” to provide the town with seventy-four gas lamps, of which forty-nine were to be erected on poles and twenty-five on brackets attached to walls or buildings. These were to be lighted from 15th August to 15th May each year from 15 minutes before sunset each night, except on three nights before the full moon, the full moon (night) and two nights thereafter. (until sunrise?)'

The provision not to light the gas standards on five nights at the time of a full moon is interesting and makes one wonder would they light them if it was very cloudy? What ever actually happened in the autumn and winter of 1937, I wonder why there is a discrepancy of twenty years between the year when Paddy Duffy (as I knew ua Dubhthaigh who was a brother of my god-father Joe Duffy) writes that there was gas-light available in Dundalk in 1817 and Artie Curran's account? The problem is that Duffy, in his otherwise great little book, as had been pointed out to me by an eminent local historian, often does not quote his sources – but, for that matter, neither did Curran, and they both did invaluable work! Young writers take note and do not make that mistake!

I suppose it could have happened that certain affluent persons in Dundalk could have managed to produce a gas that could be used for lighting and heating as early as 1817? We may never know for certain now but, if what Duffy wrote is true, perhaps Dundalk should be celebrating the remarkable bi-centenary of gas light coming to Dundalk!

Curran's article says that --- 'The “Dundalk Gas Light Company” was formed on 25th July, 1836 by a group of Dundalk men, many of whom were merchants whose names occur frequently in the commercial history of the town in the last (20th ) century.' He goes on to give a list of first trustees, headed by Robert Jocelyn, The Third Earl of Roden, who was also the man who was also mainly responsible for bringing the first railways to to Dundalk in 1849. The initial capital was raised through the issue of one hundred and sixty shares of twenty-five pounds each, five pounds per share on allocation and the balance on call. – a lot of money to raise in those far off days!

The remainder of the article is also very interesting and deals with establishment of the electrical power plant off Chapel Street by the Dundalk Urban District Council. This plant began supplying power in June of 1912, switched on by T.F. McGahon, Editor of the Dundalk Democrat and also Chairman of the Urban Council. This coming of electricity power eventually led to the demise of the Gas industry and the the social history of Dundalk!