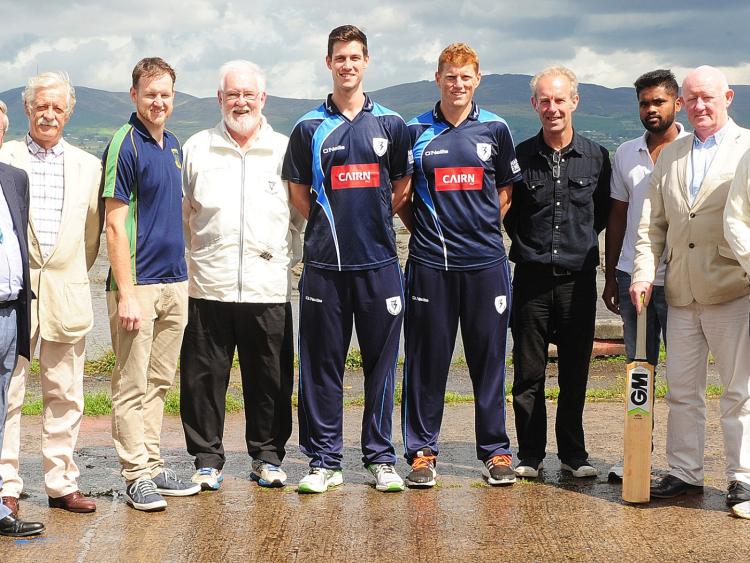 Dundalk Cricket Club were given a boost recently when Ireland stars Kevin O'Brien and George Dockrell came up to visit and help launch the club's Tesco Bag Pack day on Saturday, August 26.

Kevin, of course, is the hero of Ireland's incredible World Cup triumph over England back in 2011.  He has long been a friend of the club and helped coach the team in 2012 when Dundalk captured the Leinster Division 9 title.

George is an experienced player despite being only 25, having made his first real impression at the World Twenty20 back in 2010 as a 17-year-old and he has long been touted as a future Ireland captain.  Also in 2010, George's dad Derek was the captain of the YMCA team that provided the opposition in Dundalk's first-ever game and he is currently a senior official at Cricket Leinster.

Kevin and George were at the Spirit Store in town to help promote cricket in the area as well as the bag packing day at Tesco's main store in town, where club players, officials and friends will be raising vital funding.

In common with many amateur clubs, Dundalk CC are a small club and constantly need to raise extra funds to meet their annual costs and the club is very grateful to Tesco for allowing them to raise funds there. The club was established in 2009 and pulls in players living in all parts of Louth, as well as parts of Monaghan, Down and Meath. The team is in Division 10 of Leinster currently and still aiming for promotion with five games left.  The huge influx of immigrants from cricket playing countries has boosted the team with local players mixing with those from places like India, Pakistan, Australia, England and even Nepal.

Club secretary Derek Turner said: "It's great to see the two lads here helping us out even though they are in training with some big games coming up against the likes of the West Indies. We are also grateful to Tesco for giving us the platform to raise funds and hopefully make cricket even stronger in Dundalk."

Kevin said it has been very pleasing to see how cricket has grown in places like Dundalk in the last decade. "Since Ireland's big breakthrough at the 2007 World Cup we have had clubs springing up all around the country, including areas where the game has not been traditionally strong, which is great," he said. "Having done a bit of coaching with the Dundalk boys before I know how enthusiastic they are and hopefully they can win promotion this year and make their bag packing day a big success."

For more information about the Tesco Bag Pack or the club itself, contact club secretary Derek Turner on derek@spiritstore.ie