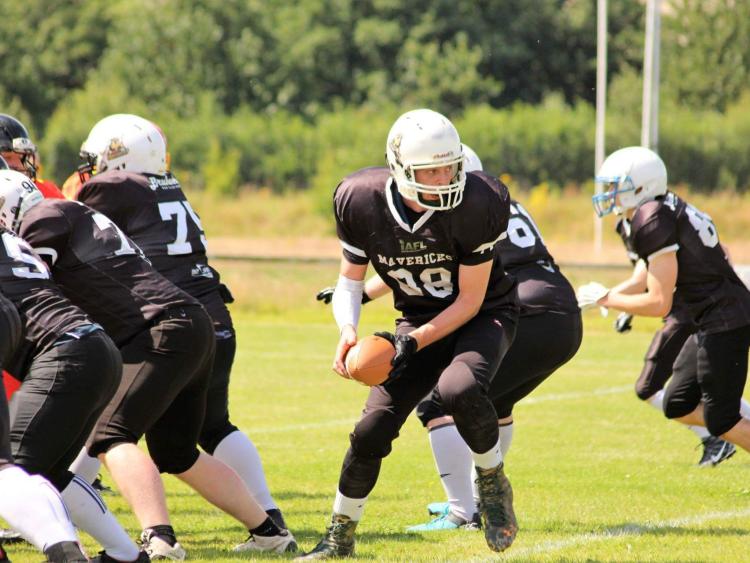 After finishing the IAFL1 regular season in 3rd place with a 5-3 record the Louth Mavericks travelled to Derry on July 23rd to take on the 2nd placed Donegal/Derry Vipers in the IAFL1 Semi Final.
Travelling to an away ground is never easy, but travelling to an away ground when missing 7 key players is even harder. The Mavs knew they'd have to dig deep, play their best game to date and fight until the bitter end of they hoped to beat the very talented Vipers Team who had already bet the Mavericks this season.
The Mavericks could not have had a worse start to the game. After falling behind by 8pts with in the first few minutes the Mavericks dug deep and fought back to lead 10-8 at the halftime whistle. Many of the Maverick players had to play on offense and defense as the sun beat down on the players. The struck next to go up 17-8 going into the the 4th quarter. The Vipers scored early in the 4th quarter which set up a thrilling final few minutes.
With the score at 17-15 at with 2 minutes left on the clock the Mavericks defence fought with true grit and determination and with every ounce of strength they had left  they battled hard to stop the vipers from scoring.
Fingernails where chewed to their stubs as the seconds ticked by. Then came the sweetest of noises for the Mavericks players coaches and supporters. The head official blew the final whistle and the Mavericks secured their place in the IAFL1 Bowl Game against the high- flying Craigavon Cowboys.
The IAFL1 Bowl Game will be held at Dundalk Rugby Club on August 20th. This will be a double header with the Meath Bulldogs taking on the Antrim Jets.