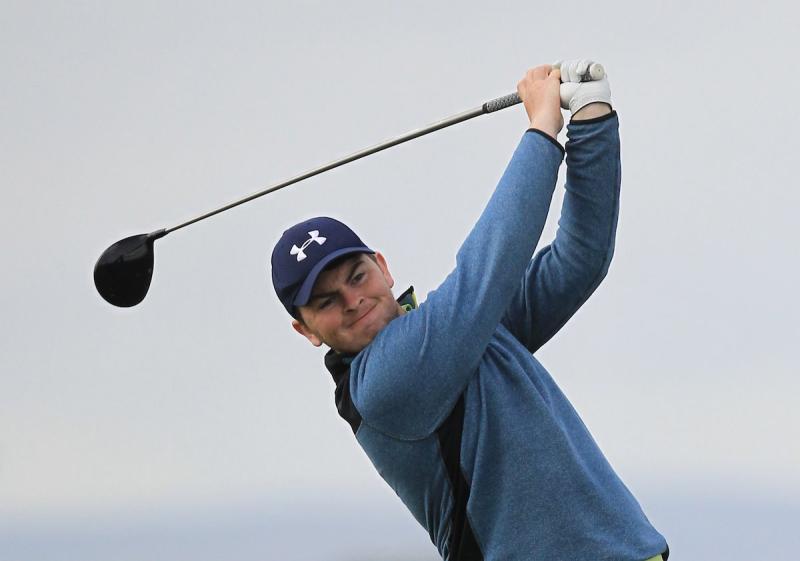 Dundalk Golf Club’s Caolan Rafferty made international headlines last week when he shot a course record 62 to finish as leading qualifier in the British Amateur Open.

A top class field of 288 of the world’s amateur players teed it up for a place in the matchplay stages of the championship and after carding a level par 70 at Royal St George’s in the first round, Rafferty found himself tied 83rdheading into his second round at nearby Prince’s Golf Club.

His round to remember began with a par before he eagled the par five second and then rolled in birdies on the fourth, fifth, seventh and eighth holes turn for home on six under par after going out in 30.

The birdie putts continued to drop down the back nine as birdied 10, 11, 13, 14 and 15 and he looked set to at least match the all-time lowest score in the Amateur Championship under a bogey five at the last left Rafferty having to settle for a ten-under-par 62, a new course records at Prince’s and the prize for leading qualifier.

“The wind was up but everyone knows back home that I love the wind and playing links golf in the wind suits me right down to the ground,” said Rafferty. “It might be a bit of a graft when it comes to getting a score out of it but I just kept hitting it to ten to 12 feet and I couldn’t miss it.

“It was nice to finish as leading qualifier. The players in the British Amateur are the best of the best. They are the closest thing to professionals that we are going to see. To come out on top is always nice.

In his opening matchplay round at Royal St George’s Rafftery has a comfortable 5&3 victory over David Ravetto of France as he continued the stunning form which saw him set that new course record at Prince’s.

That earned him a place in the last 32 against Argentina’s Alejandro Tosti, who is ranked 24th in the world compared to Rafferty who went into the week ranked 514th. Rafferty was leading by one hole with one to play when thunder and lightning halted play for over two hours. When play resumed he lost the 18th and was then involved in a titantic struggle as the match went to the 25th hole before Tosti emerged as the winner,.

After reaching the quarter-finals of the West of Ireland Championship, finishing seventh in the Lytham Trophy and earning a golf scholarship to Maynooth University, this has been a good year so far for Rafferty and he will look forward to the upcoming major championships with confidence as he chases his dream of an Irish international call-up.