Helen shared her husband Paddy's love of all things GAA 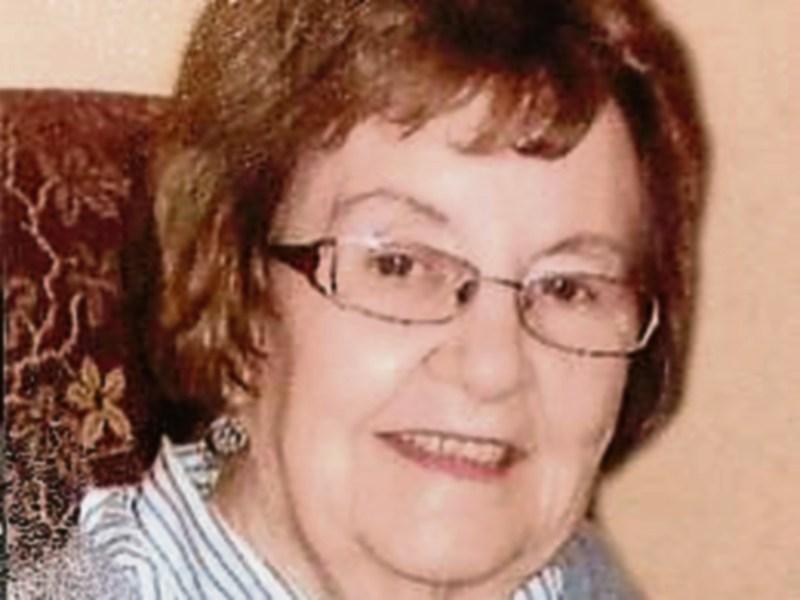 Helen Kenny of Meadow View , Avondale Park, Avenue Road who died on May 26 was wife of former Louth GAA chairman Paddy who shared her husband’s love of gaelic culture and took an active part in it’s promotion.

She was a friendly lady who made friends easily and was well known and highly regarded in her adopted town.

Formerly Helen O’Regan she was born on November 9th 1935 in Balbriggan, County Dublin – the fourth of five children to parents Michael and Mary (nee Manweiler).

Her dad was the local Garda in Balbriggan who hailed from County Sligo and her mother was from Greystones, County Wicklow. Helen’s mother was of German descent as her grandfather came to Ireland from Bavaria to settle in Wicklow in the 1870s.

She went to primary school in Balrothery National School and then on to secondary school in Loretto Convent in Balbriggan. Having successfully completed her Leaving Certificate she then did a secretarial course in Dorset Street in Dublin.

She worked as a secretary in two motor companies – Thomas Thompson and Walden Motor Company and loved the buzz of working in the city. She often referred to being greeted by the street traders in Moore Street – with a friendly “Morning Miss”.

She met her husband to be - Paddy Kenny who was from Curraghboy, County Roscommon at a dance in Balbriggan when he was stationed in Gormanston Air Corps.

They married in 1958 and settled in Drogheda a while later, where their five children were all born – Brendan, Declan, Mary, Noel and Patricia. In 1973 when Paddy got a job in Dundalk UDC the family moved to Dundalk, living firstly in Rockmount Gardens on the Carrick Road, then Saint Mary’s Road before finally settling in Holy Family parish in Meadow View, Avondale Park.

Helen was a very friendly and sociable person and made friends wherever she went. Over the years she was involved in the ICA; she worked at the Tote in the Dog Track when it was on the Ramparts, also in Dundalk Shopping Centre in Margaret Florists.

In later years she supervised exams in the Regional College as it was known at the time, which she loved. She embraced the GAA through Paddy’s involvement and got involved in SCÓR and SCÓR na nÓg and did many jobs including Secretary for a number of years and was also Bean an Tí and adjudicator at many SCÓR competitions. She really enjoyed all aspects of SCÓR as it enabled her to hone all her talents to great use.

She loved going to matches in Croke Park with the family and followed Louth and of course her native Dubs, as well as following the fate of her local club Na Piarsaigh. She had a great brain for crosswords, and loved to read and go to plays in Dublin especially when Paddy retired. She also had a great love of Irish music.

Looking after her family was a huge part of her life and she was a great person to go to with a problem. You always felt better after talking to Helen as she always gave great advice.

She was a great cook and was at the centre of many family gatherings making sure everyone was looked after. She loved going up town and every Friday morning without fail she got her hair done in the Hair Shop. She loved an opportunity for a wee whiskey and a sing song even though she was the first to admit she wasn’t blessed with a great singing voice.

She was a Minister of the Word in Holy Family for years and often did the narration of the Passion at the Easter ceremonies.

The death of her eldest son Brendan in 1995 was a huge blow to the family but Helen had great faith and with the great support of friends and family it was something that they all got through and Brendan lives on in the memories the family carry with them every day.

Helen lovingly cared for Paddy as his health failed in the latter stages of his life and not long after he passed away in 2011 Helen herself had some health issues. In July 2015 she moved in to Dealgan House Nursing Home where she was lovingly cared for by nurses, carers and all the staff.

Again, as Helen always did, she made friends in Dealgan. Until very recently she enjoyed great quality of life there. She was a great contributor to the quizzes and word puzzles that they did and was known by all the visitors to Dealgan House. She had a greeting for everyone and was very grateful for any help she was given. It was home from home for her and her family are indebted to all who cared for her so lovingly. Although Helen’s death is a huge void in their lives, the family are consoled by the many happy memories of a wonderful mother and grandmother.

Helen is survived by her sons, Declan (Dublin) and Noel (Kilkenny) and daughters, Mary and Patricia, her 11 grandchildren – David, Jane, James, Emma, Aoife, Niamh, Seán, Fergal, Liam, Niall and Aidan and two great-grandchildren, Conor and Hollie, her son-in law, Thomas Mulholland, her daughters-in law Maria and Bernie, her sisters, Betty (Drogheda) and Pam (Balbriggan) and her brother, Tony in England. Helen was pre-deceased by her husband Paddy, son Brendan, and brother, Brian in January of this year.

After reposing at her home, where the number of callers demonstrated the high regard in which Helen was held, Helen’s remains were taken to the Church of the Holy Family where her funeral Mass was celebrated by Father Frank Corry, accompanied by Father Seán O’Connor, Noel’s brother-in-law from Kilkenny.

At the beginning of Mass her great-grandchild , Conor and grandchildren, Niall, Aidan, Emma and Aoife brought up symbols of Helen’s life, including a CD of Irish music, Helen’s favourite books Tarry Flynn and Knocknagow, a wedding photo, an ornamental family tree with Helen’s five children and a picture of Balbriggan harbour.

The Readings were given by her daughter, Patricia and son, Declan. The Prayers of the Faithful were led by grandsons, Fergal, Sean and Liam and daughter, Mary.

The Offertory Gifts were presented by her sister, Pam and niece, Mary. The wonderful music and singing was provided by Róisín Crawley, Olivia Finnegan and Peter Kirk, which greatly enhanced the ceremony.

Helen’s son, Noel said a few words of thanks and shared some memories of Helen’s childhood. Helen’s remains were then taken to their place of rest in Saint Fursey’s Cemetery in Haggardstown.

Helen’s Months Mind Mass is on Sunday 2nd July at 11.00 am in Holy Family Church, Muirhevnamór.