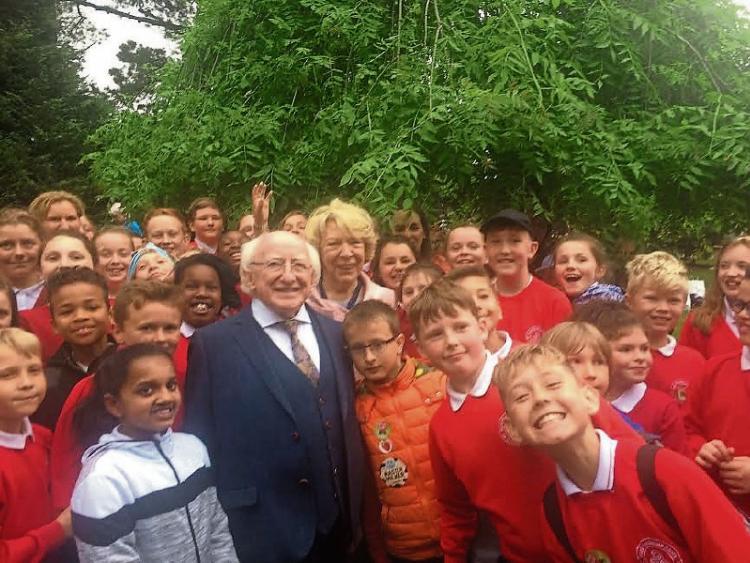 PUPILS from 4th and 5th Classes at St Francis National School went to the opening day of Bloom 2017 on Thursday and got to meet the President at the event.

The St Francis pupils have been learning how grow, prepare and cook their own food in school, as part of the Incredible Edibles Programme.

Their reward was a special visit on Thursday to Ireland’s biggest flower and food festival, Bloom in the Park, in Dublin’s Phoenix Park.

The festival is in its 11th year and has a showcase of 22 meticulously crafted show gardens, over 100 food and drink stalls and the St Francis pupils were given a special “behind the scenes” educational tour, organised by AgriAware.

The group of 50 pupils were taken on a guided tour throughout the Food Village, visited the Incredible Edibles polytunnel where they learned about Irish produce and hints on how to grow and harvest crops.

They then visited the Agri Aware Farmyard at Bloom and learned about Irish farming and agriculture and saw the animals at the show, before concluding the tour with a visit to the SEED Organic School garden where they were given hints and tips on school gardening and experienced all the activities on display.

Meeting President Higgins and his wife Sabina was an unexpected bonus and the couple chatted with the pupils about where they were from and what they thought of the festival, before agreeing to having their photograph taken with the group.