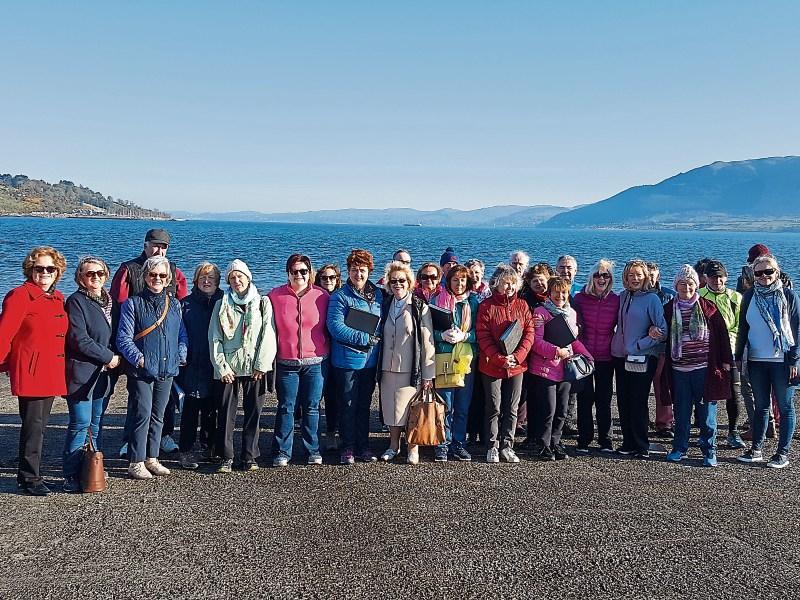 THIS year the May Bank Holiday weekend brought a lovely trip to France for local Carlingford community choir, Cór Chairlinne.

On the morning of Friday April 28th they set off early on a flight to Brussels and after a leisurely drive through Belgium arrived at their destination for the weekend, the little town of Aumetz for the Mines en Choeurs choral festival.

This year Cór Chairlinne along with 2 pipers from Carlingford Pipe Band joined with choirs from Italy, France and Slovenia to sing the weekend away and make lots of new friends. On the Friday night there was the opening ceremony in the town hall of Aumetz where the choirs were welcomed by the mayor of the town. Afterwards everyone made the short journey to the neighbouring town of Trieux for the first concert.

The concert was opened by the pipers much to the delight of the packed church and all within ear shot in the town who had gathered to hear the singing and music. Saturday morning brought another early start as the group travelled to Reimich in Luxembourg to board a boat for a leisurely cruise on the Moselle river.

The Moselle is a famous wine region and so if felt only natural after the boat trip for the group to visit a winery called the Cep d’or to find out more about wine making and sample some of the lovely local produce. Needless to say this lead to a song or two from each choir. The groups travelled back to Aumetz for a late lunch and this was also the venue for the evening concert.

After singing to another packed audience all the choirs enjoyed a wonderful meal and entertainment and a chance to dance the night away with the locals. Sunday morning was the most moving and memorable part of the whole weekend for Cór Chairlinne. The group went for a visit to the memorial at Verdun and to remember all the fallen from the battle of Verdun 100 years ago. Each choir got a chance to sing in the memorial chapel and the pipers played both in the chapel and also out at the gravesides which brought many to tears. Looking around at the grave markers and reading the names and ages of these young men both on the markers and on the walls and ceiling of the memorial was a sombre, thought provoking moment for everyone.

Sunday evening the final concert of the festival was held in the town of Piennes followed by buffet dinner and lots of goodbye songs. On Monday May 1st the choir drove back up through Belgium to catch their evening flight home enjoying the Belgian countryside and reminiscing about a fantastic weekend. The friend that were made over the weekend should bring the choir on further adventures to other parts of France and to Solvenia and Italy in the future to visit the new friends they made. In return these friends also want to visit Carlingford.

But there was very little time for the choir to rest on return from France as on the following Friday, May 5th, they participated in a three choir concert in St Michael’s Hall, Carlingford with Setanta Choir from Dundalk and Carpe Vocalis from Skene in Sweden. The Swedish choir had come to spend a few days in Carlingford after making contact with members of Setanta and so the joint concert was organised. The hall was full as the choirs sang their hearts out and there was great delight when the Swedish choir started in to a few familiar Abba numbers. The Sunday morning has everyone up very early as Cór Chairlinne participated in a 7am Dawn Chorus at the shore line in Carlingford before waving their new Swedish friends good bye as they travelled back to catch their flight home. On Sunday May 21st the choir sang in a concert with St Agnes Parents string orchestra from Dublin and Oequesta Crescendo orchestra from Madrid in the Foy Centre. This again was a night filled with wonderful music and even the chance to get up and have a waltz or two. The 2 concerts in May were used as fundraisers for the RNLI and in total €2600 was raised over the 2 events.

Cór Chairlinne finished off a busy season by participating in the morning prayer service at St Andrew’s, Bush on May 28th and had a long, leisurely lunch together in the Orchard Bakery and Café where Jonathan provided a delicious meal. The choir are now on a well-deserved break for the Summer but will gladly get back to full voice if they receive a call to action.

If anyone would like to join Cór Chairlinne they are more than welcome to phone Elaine on 087 2981868 for more details. The choir loves to see new members joining. There is no audition – the only requirement we have is that you love to sing