Rose was know for her hearty laugh and sense of humour 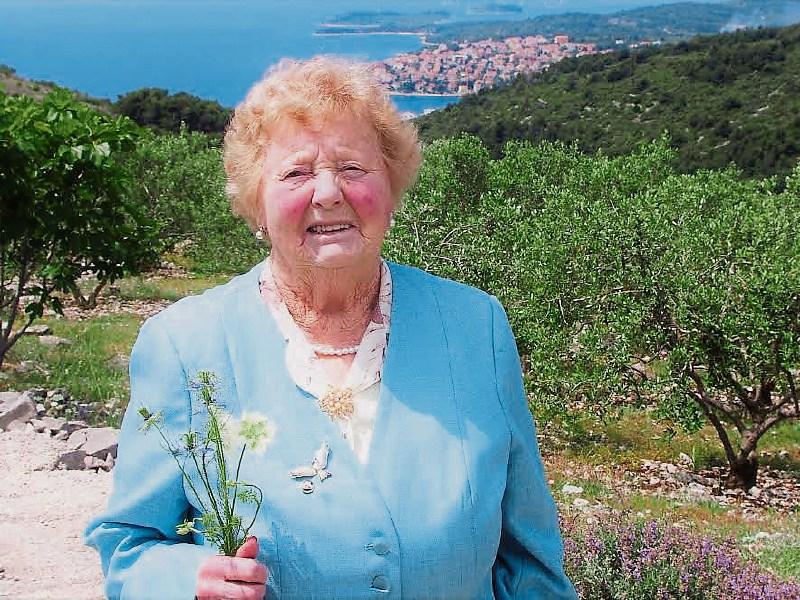 Rose Long, Grove Road, Carlingford, County Louth who passed away peacefully in Our Lady of Lourdes Hospital, Drogheda, on Monday, May 15, 2017, was happiest when surrounded by her loving family.

Rose, who just celebrated her 89th birthday last March, was a popular lady and well-known.

Daughter of Peter and Ellen Rice, Grove Road, Carlingford, she attended Carlingford primary school along with her only sibling Patrick.

Following her education, she went to work with the McCann family, a short distance from her home, where she spent many happy years.

She then went on to work with James and Una Woods, Eblana House, Carlingford, where her duties were housekeeping and caring for their two children, Jim and Elizabeth, whom she adored.

On June 29, 1960, she married her beloved Hugh in Saint Michael’s Church Carlingford. Their wedding reception breakfast was held in Wood’s Café, Newry Street.

Hugh joined Rose in her family home on Grove Road, where they spent many happy years together and reared their four children.

Rose enjoyed her weekly trip to Carlingford day care centre, where she would meet up with some of her lifelong pals and old school friends.

She enjoyed a game of bingo, especially when she won! She also lived for her game shows on TV and watching DVDs, when she could get them to play, of all her favourite country bands, Daniel O’Donnell, of course, being no 1.

Rose had a youthful sense of humour and was known far and wide for her hearty laugh, happy demeanour and soft heartedness. It didn’t take much to bring a tear to her eye, be it a happy or sad one.

Rose was most content when out and about. She loved going for a cycle on her bike, her pride and joy. She cycled up to the age of 87, whether it was to attend mass or going down to her beloved Carlingford on a sunny Sunday to get an ice cream and sit with one of her closest old school pals, Bridie McKevitt, and watch the world go by.

This would be followed by a regular trip into Carlingford Antique shop to see what Paul had picked up since her previous visit. She loved a good bargain. Rose also loved her holidays abroad, and looked forward to her Red Cross trip every September, and frequent visits to Knock. She had tremendous faith and devotion to Our Lady. Just last year, at the age of 88, she went to Lourdes, Rome, and Medjugorje.

She looked forward every year to her annual trip to Medjugorje, and it was a must to climb the hill to the ‘Big Blue Cross’ every time.

Rose had a huge love for animals. From an early age, she always had many dogs, cats and goats around her. In later years, Rose and Hugh had a flock of sheep. Many a lamb and kid goat was hand-reared in front of the fire.

She loved being at home in her own surroundings. When at home she enjoyed baking, and was widely-known for her homemade brown bread, Christmas cake, puddings and all flavours of jams. This was one of her many talents.

Photography was another passion, the camera always at the ready; while knitting was another favourite hobby. She loved to make scarves, and when a new baby was born, she would make some beautiful knitwear. There was never a hole in a pair of socks when Rose was about!

She loved when her children, grandchildren and great-grandchildren called to visit. The kettle was always on the boil and nobody would leave without a cup of tea and a snack. You would never be let go hungry.

At this sad time, the family is suffering a huge loss, but their pain is eased and their hearts are being comforted by the memories that have been made and left behind which will only get stronger with time. Rose will be deeply missed by her sons, Peter (Carlingford) and William (Moungbagnal), daughters, Rosemary (home) and Bridget Harper (Dundalk), grandchildren, Gerard, Adriel, Dwayne, Samantha, Jenny, Alannah and Dillon Long, Kelly Larkin, Gerard, Claire, Kerry, Nicola and Brianna Harper, son-in-law, Martin Harper, along with daughters-in-law, Colleen and Josephine Long, 17 great-grandchildren, nephews, nieces, relatives and friends She was predeceased by her husband Hugh, on June 16, 1996, brother, Patrick Rice and sister-in-law, Bridie Rice.

After reposing at her residence, Rose’s remains were taken to St. Michael’s Church, Carlingford for Requiem Mass celebrated by Very Rev Fr. Brian MacRaois, who delivered the eulogy.

Before Mass, gifts symbolising Rose’s life were brought to the altar by her grandchildren. The gifts included a bingo book and markers, a camera, a bicycle pump, Medjugorje Blue Cross, music DVD, knitting needles and wool.

The Readings were read by her son, Peter and daughter, Rosemary. The Prayers of the Faithful were led by grandchildren, Adriel Long, Dillon Long and Brianna Harper, son-in-law, Martin Harper, daughter-in-law, Colleen Long and god daughter, Philomena Joyce.

The Offertory Gifts were taken to the altar by son, William and daughter, Bridget.

Rose was laid to rest in Saint Michaels Cemetery, Carlingford. The funeral cortege was led from her home on Grove Road to Saint Michael’s cemetery by Paddy McShane playing a lament on the bagpipes, and grand-daughter, Samantha Long walked with Rose’s bicycle.