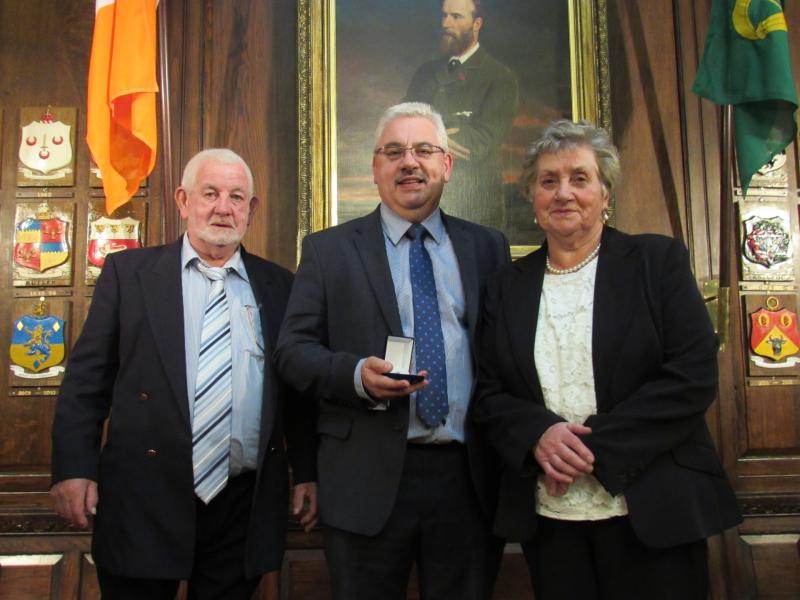 Dr Peter Geraghty with his parents P.J. and Breda of John Street, Ardee

On the 6 June 2017, Ardee native Dr Peter Geraghty, was awarded the Old Dublin Society’s Silver Medal in the Mansion House in Dublin.

The medal awarded for the best article written each year and published in the Society’s Journal, the Dublin Historical Record, was presented by the Deputy Lord Mayor of Dublin, Councillor Rebecca Moynihan.

The ceremony took place during the launch of the 2017 Journal in the historic surroundings of the Oak Room of the Mansion House overlooked by coats of arms of Dublin Lord Mayors and the paintings of Charles Stewart Parnell and John Foster of Collon, the last Speaker of the Irish House of Commons.

Peter was accompanied by his parents P.J. and Breda of John Street, Ardee and his younger brother Marin and wife Fiona of Richardstown, Ardee.

Peter received the medal for his article entitled: “Dublin’s first automobiles – early steam carriage trial on the streets of Dublin”.

The article discusses how steam powered vehicles first appeared on Ireland’s roads in the 1830s, many years before petrol and diesel power was used.

One of the great proponents of these vehicles was engineer Sir John Macneill from Dundalk.

Peter in thanking the Society and the Deputy Lord Mayor said "It was a privilege and honour to receive the Society’s medal” and that he “was delighted that his article was so well received by the Society’s members”.

“Local history is often a labour of love and I am thrilled that my labour of love has found such favour with the society and that so many enjoyed reading it.”