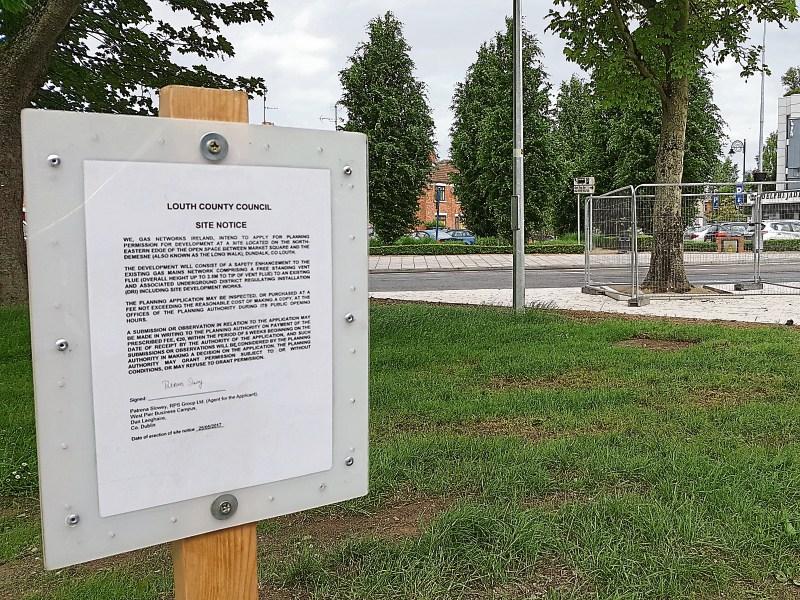 Gas Networks Ireland have applied to Louth County Council for permission to develop a site at the Demesne in Dundalk Town Centre.

The planning, received by Louth County Council on May 26 last, specifies the location as being on the “North Eastern edge of the open space between Market Square and the Demesne(also known as the Long Walk), Dundalk, Co.Louth”.

According to the application, the works are to provide a safety enhancement to the gas mains supply in the town centre. The development description is as follows: “Permission for a development at a site to consist of a safety enhancement to the existing gas mains network comprising a free standing vent flue (overall height up to 3.5m to tip of vent flue) to an existing and associated underground district regulating installation (DRI) including site development works.”

This is the second completed applicaton submitted by Gas Networks Ireland forthis location. An application made in August 2016 and was refused in September 2016

According to the decision made by Louth County Council, the reasons for the refusal in 2016 are as follows: “The height and location of the proposed pressure unit and vent flu is such that it will have a negative impact on the existing open space and therefore will adversely affect the character of the Magnet Road and Demesne Architectural Conservation Area. To allow for this development at prominent location would be contrary to policy CH10 of the Dundalk and Environs Development plan 2009-2015 (as extended) where it is the policy of the council to protect the character of the Architectural Conservation Area.

“Accordingly to permit the proposal would materially contravene the provisions of the development plan and be contrary to the proper planning and sustainable development of the area.” As the height and location of the proposed structure in the 2017 application is the same as that of the 2016 application, it is unknown thus far how the current application may fare.

The decision on the application is due July 20.