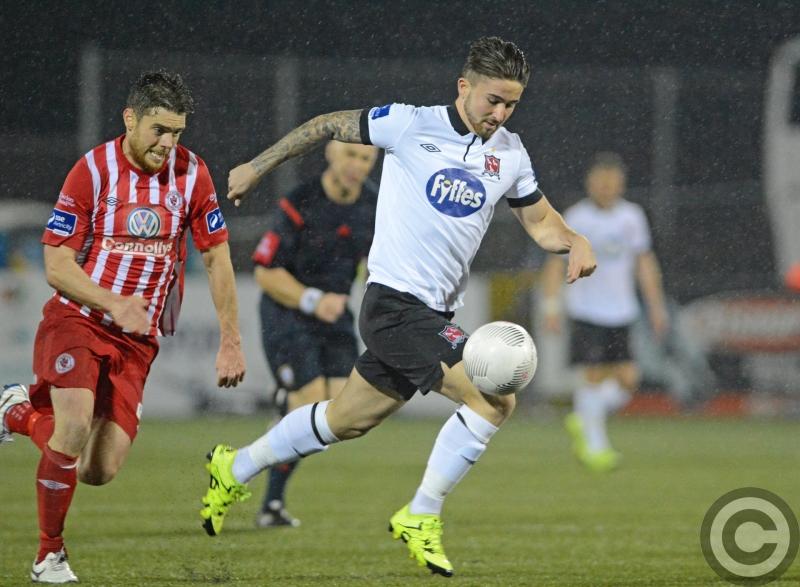 Seán Maguire in action for Dundalk in 2015 (Pic: Ciaran Culligan)

In reality, his has always been a lofty trajectory.

"I'm a great fan of Lionel Messi at Barcelona, and when I look at Seanie, he really reminds me of him,” waxed Waterford's John O’Sullivan of his then teen prodigy.

West Ham were the side to ultimately put their money where his mouth was back in 2013, signing the Luton-born striker to a three-year deal.

For O’Sullivan, it seemed a sure thing.

"Seanie has that world-class kind of balance, that burst of speed and he's powerful on the ball. He has a great shot from any range and he's good in the air. He has everything going for him.”

"If Seanie keeps progressing the way he is, it won't be long before he's getting first-team football at West Ham, and there is no question whatsoever he will be a star one day for the Republic of Ireland."

His seemed a talent bound for the big stage, yet much of his stint in London’s east end was spent off-broadway.

Indeed, such was his struggle to make an Upton Park impression that he found himself on the move again, loan spells at Sligo and Accrington Stanley doing little to relight his fire.

That flame was all but out by the time Dundalk signed him from West Ham upon his 2015 release, the relentless rise of Stephen Kenny’s well-oiled machine consigning Maguire to little more than a bit part role.

It would be left to Cork City to return the pep to his step, Caulfield and co. turning his lowest ebb into the crest of a wave.
Maguire's much-mooted international prospects now seem back on the cards, Martin O’Neill’s attendance proof enough that the Kilkenny man has returned to his radar.

It’s a resurgence that hasn’t gone unnoticed across the pond either, 47 goals for the Leesiders enough to secure Maguire a second bite at that particular cherry.

The 23-year-old’s impending move will see him become the latest League of Ireland alum to make the move to Deepdale, the home of Preston North End, with Cork reportedly raking in €150,000 for the privilege.

Come awards season in November, his contribution will likely feel a lot more valuable than that.