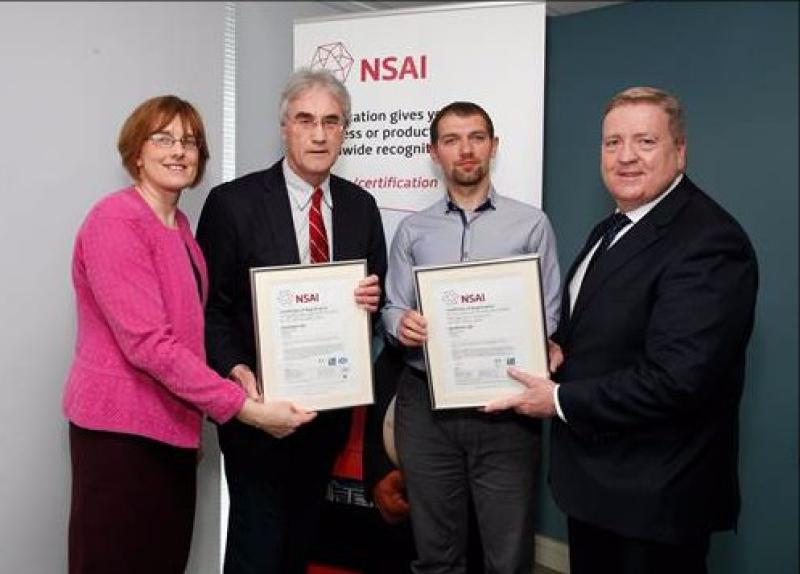 Operating since 1995, Suretank Ltd is a manufacturer of equipment to the oil and gas, agri-food, bio-pharmaceutical, marine and data centre industries, among others.

It employs 120 people at its facility in Dunleer and was among 24 organisations honoured at a special ceremony at the National Standards Authority of Ireland (NSAI) offices in Dublin on Tuesday, May 23rd, 2017.

Speaking before the event, Tom Moody, General Manager at Suretank Ltd said achieving certification to these standards will help give the firm a competitive edge.

“Achieving certification in OHSAS 18001 and the re-certification to the latest version of ISO 9001:2015 is extremely valuable to Suretank’s business and reputation going forward,” said Moody, “we are a well-established company, with over 20 years of experience in the Oil and Gas industry.”

“As we move towards new markets, such as IT with modular containers, pharmaceutical and construction, the OHSAS 18001 accreditation demonstrates Suretank’s efforts into how we manage our Health and Safety programme in accordance with recognised methods and practices”, he added, “having achieved ISO 9001 back in 2004 and more recently been re-assessed to the current revision of ISO 9001:2015 it demonstrates a dedication to detail and quality by all of the team.”

“Achieving certification in OHSAS 18001 is extremely valuable to Suretank’s business and reputation going forward. We are a well-established company, with over 20 years of experience in the Oil and Gas industry,” said Mr Gatalski, “As we move towards new markets, such as IT with modular containers, pharmaceutical and construction, the OHSAS 18001 accreditation demonstrates Suretank’s efforts into how we manage our Health and Safety programme in accordance with recognised methods and practices.”

“It also gives us confidence and empowers us to build upon and implement even better Health and Safety management system. In fact, OHSAS 18001 certification provides us with the structure to continuously improve our system and to prevent and avoid accidents, incidents and dangerous occurrences,” he added.

All of the organisations who achieved certification were independently audited by NSAI inspectors in order to ensure they complied with the standards.

The 24 organisations honoured at the ceremony have offices or facilities in 14 different and were presented with their certificates by the Minister for Employment and Small Business, Pat Breen TD.

"Achieving certification takes hard work and dedication. It can only occur when a team of smart, competent, dedicated people work together, but it also takes great leadership and a team effort,” said Minister Breen.

According to a new survey conducted by NSAI, almost two-thirds of Irish organisations believe that a hard border between Northern Ireland and the Republic would negatively impact their business.

A further 14 per cent of respondents who took part in the online poll said they didn’t know whether customs controls along the 500km frontier would harm their trade, while 23 said they believed it would have no impact.

With just under a month to go until Brexit negotiations are predicted to officially start; Irish businesses are split as to whether the UK’s exit from the European Union will affect how they operate.

55 of the organisations surveyed that Brexit as a whole will negatively impact their organisation. A further 19 said it wouldn’t, while 26 said they don’t know.

"With Brexit looming, it appears that British pre-qualification requirements for tendering may begin to demand certification to ISO international standards as a prerequisite. I urge all Irish organisations who may be considering this route to be prepared,” she added.

NSAI invites members of the business community and the general public to get involved in the development of standards by visiting the Your Standards, Your Say web portal on All standards are also available from www.standards.ie