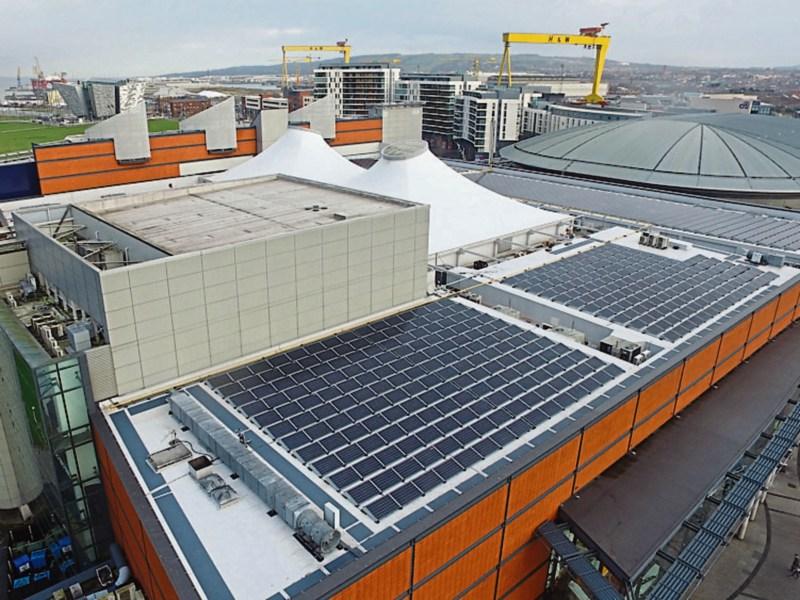 Activ8 Energies, based in Carrickmacross, installed 1500 suntech solar panel across the six rooftops of the SSE Arena in Belfast, a scale equivalent to that of 12 tennis courts.

The venue itself, formerly known as The Odyssey Arena and situated in the Titanic Quarter, boasts a peak occupancy of 11,000.

The building’s new installation will produce 320,000 kilowatt hours of electricity per year going forward as part of its 420 kilowatt peak system, and will thus offset over 140 tonnes of harmful carbon annually.

Initially founded in 2004, Activ8 Solar Energies has been operating under its current guise since 2007 and is steered by owner and founder Ciaran Marron.

In the intervening 10 years, the company has become Ireland’s preeminent provider of solar energies systems, affording its customers the unrivalled knowledge and experience that comes with installing approximately 10,000 units both here and in the UK.

Activ8’s current premises, officially opened eight years ago by Minister Eamon Ryan, serves as a central hub for National Sales and Installation and a key source of employment in the area. Moreover, the company now caters for a wide array of services in the Irish solar industry, accommodating everything from small domestic Solar Thermal Systems to large Solar PV projects.

Almost 350,000 homes have benefited from grants through the Sustainable Energy Authority of Ireland (SEAI) to make energy improvements in their homes. SEAI is urging homeowners to avail of their entitlement to the grants which cover about 30% of the average cost of the upgrade works, making their homes warmer and more energy efficient.

Grants are available to homes built before 2006 for attic insulation, wall insulation (internal and external), heating upgrades and solar heating.