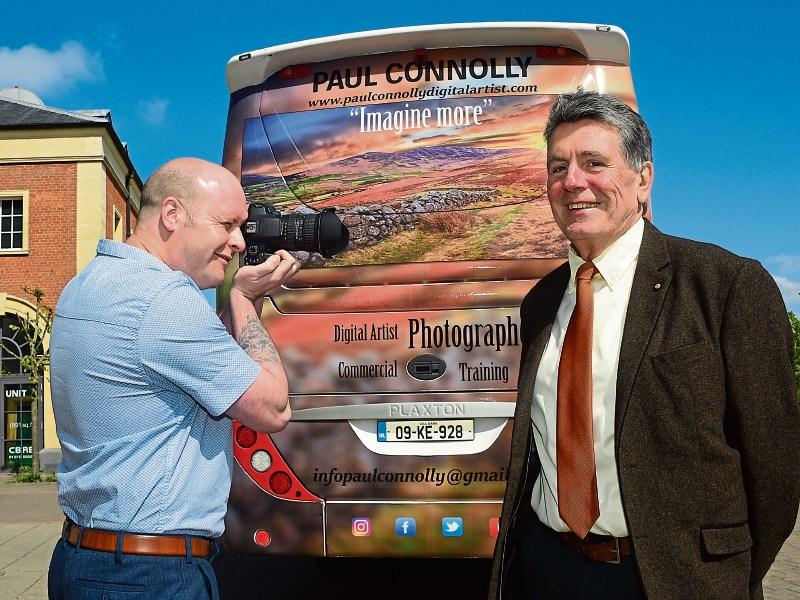 Local photographer and digital artist Paul Connolly will see his work showcased to thousands of people a day on the back of a bus as the latest winner of the nationally acclaimed Matthews.ie Arts Showcase initiative.

The award promotes and provides innovative advertising support to a succession of local artists in Louth, Monaghan and East Meath across a range of disciplines over a three-year period.

The Matthews.ie Arts Showcase Initiative won Best Use of Creativity in the Community in the 25th Allianz National Business To Arts Awards in 2016.

It is hugely supported by Louth and Monaghan Arts offices and attracts a large amount of entries from local artists.

Every six months, a deserving person from the creative sector across the arts disciplines in Louth, Monaghan or East Meath is selected as the showcase winner and have themselves or their works featured as an advertisement on the full back of a Matthews.ie coach

Paul’s 3.6 metre ad will be seen on some of the company’s 133 daily services between Dublin and the north east from this week.

The scene is a local one, of Annaverna, Ravensdale, which Paul took while out on one of his many adventures rambling over the Cooley Mountains.

“I love to showcase the beauty that surrounds us and every day there is a completely new image to capture and develop further,” said Paul, who is originally from Dromiskin, and now living in Carrickmacross.

Paul believes his dyslexia can be greatly credited in aiding his successes to date as a photographer/digital artist. Although it has been a constant barrier for him all his life, the ability to think differently enables his creativity to flourish and continually grow.

“This is an amazing award to win, and will give my business and practice

exposure to a wider audience than I could have ever have reached myself,” said Paul.

“As an artist, good publicity is essential for my business to survive and thrive, and to be showcased on the Matthews service will bring my work to the attention of thousands of people a day.”

“Paul has an eye for seeing an image, imagining its beauty and potential, and transforming the captured shot into a stunning artwork,” said Matthews.ie Managing Director Paddy Matthews.

“His work in digital art has inspired his slogan Imagine More, which fits in perfectly with a company whose guiding ethos is There’s More To Matthews.

“We have always put the art and culture of the area to the fore in our numerous day and extended tours which promote the north east, and we see the benefits in promoting the artistic life of the region.

“Nominations are now open again and artists can enter themselves for consideration for this valuable prize by downloading the entry form from www.matthews.ie.”