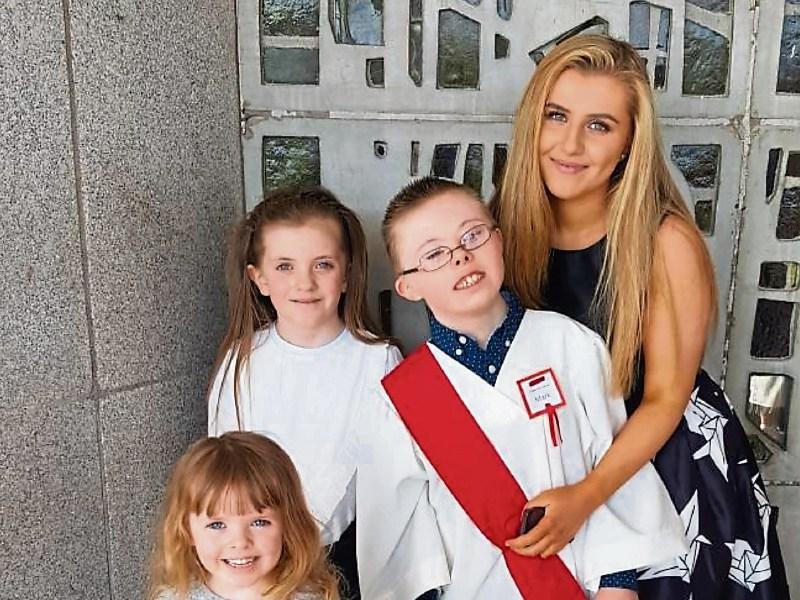 Patrick Kehoe is a 12-year-old boy who lives with his three siblings and parents in Dundalk.

Patrick has Down Syndrome, is non-verbal and has had numerous health problems since birth.

Patrick’s mother Elaine Kehoe contacted the Democrat to help highlight Patrick’s plight, raise awareness of the JIA (Juvenile Idiopathic Arthritis) crisis in Ireland and tell us about the support iCAN has provided to Patrick and the family since his diagnosis.

“Patrick has had a very tough 3 years since he was diagnosed with JIA”, began Elaine. “It was completely by chance that we found out that he had arthritis 1 month after his 9th birthday. He had been limping and it got progressively worse over a year. It was put down to him having DS. Easter Sunday 2013, we were in Dublin and he tripped and fell breaking his femur.

“He spent 1 week in Crumlin hospital and had tests for cancer which thankfully came back negative. He had extensive physio in our local disability services in Mounthamilton House and we found out Crumlin hospital were running mobile clinics to check whether children with DS had markers for arthritis in adulthood.

“It turned out he had extremely bad juvenile arthritis in 15+ joints from his jaws, wrists, hands, fingers, knees, ankles, toes. It was devastating to hear, as Patrick being non-verbal couldn't tell us he was sore and in pain.

“He was admitted into Crumlin hospital where he had steroid injections into 3 joints - they only had theatre space/time to do 3 joints - they have very limited time in theatre each month which is often cancelled on them, which is a disgrace - and he spent 5 days on IV steroids for the other joints. He was started on methotrexate (mtx) tablets which is a cancer treatment which is used to treat arthritis. This didn't help Patrick and his pain.

“He was then started on methotrexate injections. Again, didn't help sufficiently to control the inflammation. He has been on various treatments - weekly Enbrel injections (which is a Biologic medication) and mtx tablets and now Humira injections and mtx tablets. We are hoping this works.

Patrick has been waiting on steroid joint injections under GA since August 2016.

He had a DEXA scan in March as wrist x-rays from Sep/Oct 2016 showed erosion in the bones and cartilage.

“The DEXA scan showed erosion and thinning of the bones and he was diagnosed with Osteopenia which is a step down from Osteoporosis- Patrick is just gone 12 years old. It is heart breaking that he is going through this at such a young age. We were also told the same week as the DEXA scan results that he has a low thyroid which means more lifelong treatment.”

“The founding member of iCAN (Irish Children with Arthritis Network) Wendy Costello, contacted me after Patrick was diagnosed with arthritis and invited me to join iCAN. They have been a lifeline for me and my family. Before this we had no help, no support and no one to turn to for advice.

“The members are all parents of children with arthritis. It is an extremely supportive, caring, sharing and helpful group and I have never come across such a wonderful group of people and I am a part of a few groups (Down Syndrome Ireland and MS Ireland as I have MS). You can ask any of the parents anything and within minutes someone will reply with any help or support they can give.

They run fun days and meet ups regularly for the children to get together and it's all volunteer based. Parents give up their time to fundraise and to raise awareness of juvenile arthritis. Crumlin Hospital only had two rheumatologists who were also on the general medical rota meaning they couldn't dedicate their time to our children. After a long time advocating and endless meetings with Ministers/TD's, etc. they were successful in having them taken off the general medical rota. This is only 1 example of what they have achieved.”

“Wendy and the committee advocate tirelessly to raise awareness of JIA.

“The new National Children's Hospital which is due to be constructed has no designated rheumatology/arthritis clinics.

“It is to be shared with other conditions which cannot happen. We need a designated department for our children's serious medical needs to be treated as a priority.

“We need funding for what has been submitted to the HSE and we need a unit in the new hospital. Our kids service needs to be a priority when there is competing demands on funding. iCAN need a meeting with Eilish Hardiman, project manager of the new hospital, and we need to be officially told at that meeting that there are plans for a dedicated unit.

“iCAN were told by the rheumatology team in Crumlin that they would be sharing services in new hospital and there was no plans for a dedicated unit for rheumatology.

“This is not good enough as already waiting times for diagnoses/treatment/steroid injections/checkups, etc. are too long. Children need to be seen urgently to reduce damage from inflammation.”