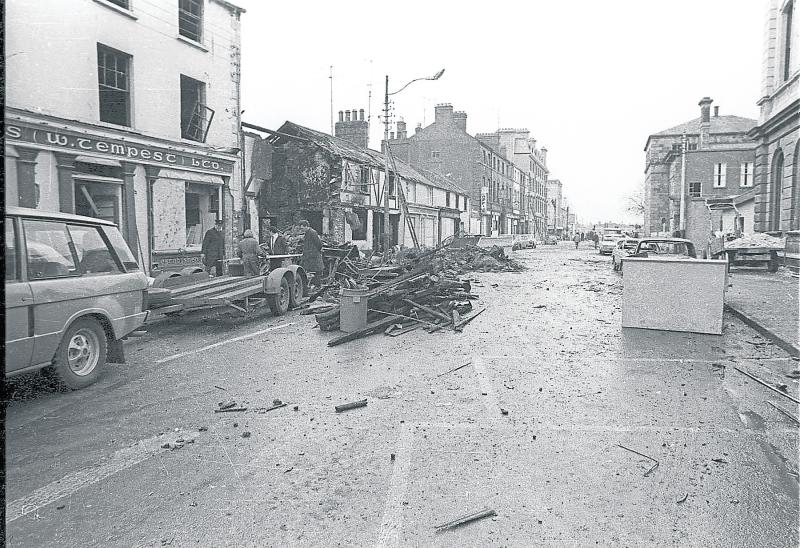 Declan's father's office was destroyed in the blast.

Fianna Fáil TD for Louth and East Meath, Declan Breathnach, spoke to us recently about his memory of the bombing of Kay’s Tavern in Dundalk in 1975, and reveals that by pure chance, his family were spared tragedy on that terrible day.

He shares with us his recollections of the day and his views on the Government push for a British inquiry into this, the murder of Seamus Ludlow and the Dublin Monaghan bombings.

‘Obviously, the tragedy of the Monaghan and Dublin bombings is still acutely felt. We were also visited by tragedy in our own area, as you know with the Kay's Tavern bombing.

‘I have a vivid memory of that particular day. I was at the time in St. Patrick's College in Dublin and would normally thumb a lift home, or take the bus.

‘My father would wait in town for me to give me a lift out home. Fortunately, on the day before the Kay's Tavern bombing I had phoned to say I was getting a lift with a relative, as I had a lot of things to take home that week.

‘Consequently, my father was not at his office waiting for me but was at the top of Park Street, when the bomb went off.

‘Any other week he would have been waiting at his office for me to get off the bus. His office opposite the Courthouse was destroyed.

‘My father and the entire community were horrified at the tragedy and the loss of the lives of Jack Rooney and Hugh Watters.

With regards to looking to the future Deputy Breathnach has this to say:

‘As vice chairman of the Oireachtas Joint Committee on the Implementation of the Good Friday Agreement, there are many legacy issues that need to be addressed on all sides of the divide, the Monaghan and Dublin bombings, Kay’s Tavern bombing, the murder of Seamus Ludlow but if there is to be real closure and truth and reconciliation it has to happen on all sides.

‘It's not just about republicanism, but all sides need to account for tragedies that happened.

‘The Miami showband attack by the UVF in 1975, the Kingsmills Massacre in 1976 and not to mention the details of the disappearance in 1977 of former SAS member Robert Nairac.

‘Families across the divide are grieving. I would concur with Minister Charlie Flanagan on the need for all sides to engage in a process of truth and reconciliation.'