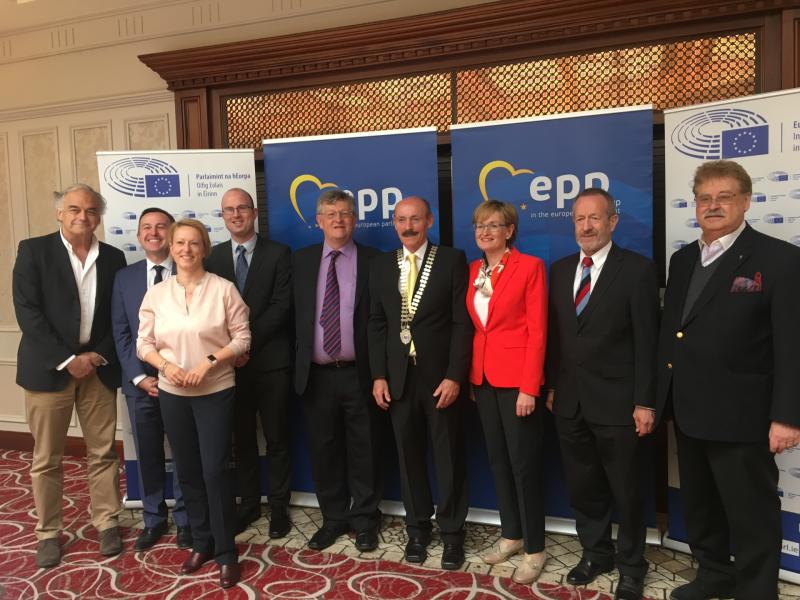 Dundalk Chamber was invited to meet three Euro MEPS from Spain, Netherlands and Germany with Mairead McGuiness at Carrickdale.

Michael Gaynor, President and Paddy Malone PRO outlined the concerns the Chamber had over BREXIT.

Michael thanked Mairead for giving the Chamber the opportunity to express the Chamber’s concerns. He outlined the problems that will be created on commuters ,commerce and trade.

He pointed out that the border had become invisible and no longer had an impact on people’s lives. It was our wish that as far as possible that this remains. He warned that without proper planning all aspects of living along the border would be affected.

Paddy raised the issue that if Ireland had a special case then the border counties had an even greater concern and required special treatment. He called on the EU to allow the National Government some flexibility with regard to State id rules. He outlined the calls already made regarding:

1. Rates relief;
2. Interest subsidies to SME exposed to BREXIT and
3. The long held call for the Living City Imitative to be extended to Dundalk.

The MEPs were impressed with Carlingford Lough and recognised the arbitrary nature of the border. However they were clear that the border would be not between North and South but UK and EU. They confirmed their wish to minimise the impact that BREXIT will bring.

Other people who spoke included Conor Patterson, Newry Chamber and representatives of IFA and An Garda Siochana