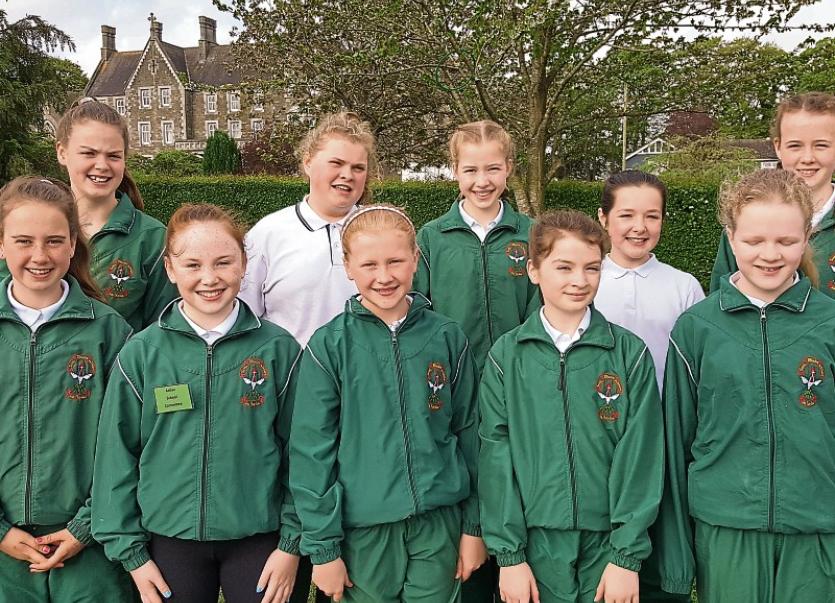 Active Schools Week is a nationwide initiative which strives to provide enjoyable and inclusive physical activity opportunities for the school community.

It reinforces the message that not only is physical activity good for you, but can also be fun! This year, “Active Schools Week” took place from the 24th to the 28th of April. The theme for the week was “Active is the new Attractive” – the winning slogan in an in-school competition, penned by Róisín Kerr from fourth class. On return from their Easter holidays, the entire school community of Scoil Mhuire na Trócaire in Ardee immersed themselves in five days of fun and fitness in an effort to promote physical activity among pupils.

In an age where computers, iPads and mobile phones mean that many games revolve around handheld devices, the old childhood games seem to be losing their appeal. We are consistently reminded through the media that children are not meeting their daily physical activity needs. Scoil Mhuire na Trócaire has a long tradition of nurturing the sporting talent of pupils. The school has an ever-increasing range of activities on offer, with after-school yoga sessions recently added to the myriad of activities including swimming, céilí dancing, badminton, rugby, Gaelic football to name but a few.

One of the highlights of the week was the daily morning call ‘Wake Up, Shake Up’ in the school yard, which saw pupils flaunt their fancy footwork as they danced to current chart-topping singles. The movements were choreographed and performed by the creative, hardworking members of the Active Schools Committee. This injection of physical activity proved enjoyable to the children. It improved their concentration first thing in the morning, helped to shake away the cobwebs and set the tone for the day ahead.

Each day a number of activities were included in the school timetable, including laps of the yard, “Drop everything and Dance” and “busy breaks”. The eagerness and zeal of the children was palpable as all pupils fully engaged with the games and activities.

On Tuesday, senior pupils participated in a Poc Fada competition in the school campus. Each and every Wednesday is recognised as WOW day in Scoil Mhuire na Trócaire, when the emphasis lies on walking to and from school. This idea has a twofold benefit as it not only encourages healthy wellbeing in body and mind but it also promotes a greener environment, an issue which is close to the hearts of all in the school. The teachers and pupils went one step further on the Wednesday of Active Schools Week with a midweek walk in the vicinity of the school.

An air of excitement permeated on Thursday as the school welcomed local sports personality Mr. John Bingham. Accompanied by his brother Andrew, John shared his personal story. The St Mary’s corner back has enjoyed a great run of form with his club football of late, and fresh from an appearance at GAA headquarters, Bingham was full of advice and encouragement to the budding footballers in the school. Albeit a disappointing result in Croke Park on the 8th of April, the prospect of Divison 2 football in next year’s Allianz National League is, as alluded to by Bingham, exciting and the focus now is on the Championship encounter with Wicklow at the end of May. The children listened intently as their local club footballer charted his progression from underage schoolboy level to current club player. A questions and answers session afterwards proved interesting and informative. Some of the senior pupils were lucky enough to put their skills to the test with a coaching session led by the Bingham brothers.

Active Schools Week concluded on Friday, with Rugby taking centre stage for the senior classes. Mr. Fergal Callaghan, local rugby coach and parent of second class pupil, Anna, delivered a thought-provoking and stimulating presentation to the children. Fergal highlighted the success of women, in particular Irish ladies, in the field of rugby banishing any stereotype or old-fashioned opinion that women were “not strong enough” to engage in this physical sport. Fergal spoke about the quality of the current crop of international players and their remarkable achievements in recent months. Whilst the nation was gripped with Six Nations fever, cheering on our rugby heroes, the heroines are often left in the shadow and do not always receive the praise that they deserve. Stunning performances and victories over New Zealand and England served to demonstrate their level of talent. The girls of Scoil Mhuire na Trócaire were enthralled as they watched some clips of a typical women’s rugby training session. Afterwards all classes from 2nd to 6th participated in a coaching session under the leadership of Mr. Callaghan.

Meanwhile, Junior classes were engaged in gymnastics partaking in lessons with Mr. Niall Teather who has been training pupils of Scoil Mhuire na Trócaire for a number of years. His gymnastic sessions are thoroughly enjoyed by all and certainly one of the children’s most eagerly awaited lessons of the week!

Friday afternoon saw no sign of deceleration, as the trustee dance troop of the Active Schools Committee led an in-school dance-a-thon, getting pulses racing and once again communicating the message that physical activity is a vital element of our daily routine.

Without doubt, Active Schools Week was a resounding success and the children are now very much aware of the importance of keeping active. The Active Schools Committee, made up of 11 dedicated senior pupils, play their part in ensuring that children are getting their 60 minutes of physical activity each day. Children are encouraged to take any steps which will help to incorporate exercise into their daily routine “Is fearr rith maith ná droch sheasamh”, mar a deirtear. With summer on the horizon, evenings lengthening and hopefully a little more sunshine on the way, it is the ideal time for the children to incorporate some outdoor activity into their day.

“At the end of the day a child’s feet should be dirty, hair should be messy and eyes should be sparkling” – Shanti.