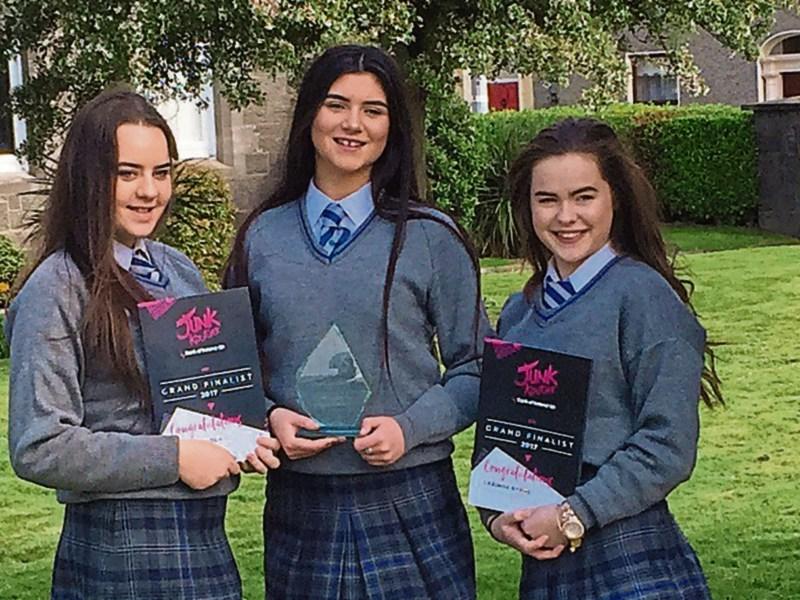 Over eighty secondary school students sporting their stunning couture designs fashioned from junk stormed the stage at the 3Arena Dublin on Thursday, 27 April, competing at the Grand Finale of Bank of Ireland Junk Kouture.

After months of preparations the talented teenagers strutted the catwalk with their carefully choreographed routine in the hope of impressing the judges in front of thousands of screaming fans in Ireland’s largest indoor venue.

This is Coláiste Rís' second time competing in the National finals along with their teacher Ms.Mardeen Mc Caughey and where represented by three designs, Can You See Me Now, Wonka’s Wonder and Pandora’s Box. The Judges for the competiton included Louis Walsh, Una Healy, Jane Leavy, Rhys Ellis and Tracy Fahey, while Glenda Gleeson was the MC for the night.

With a strong reference to the glamour and highly intricate detailing of Dolce & Gabbana “Sparkling Night” Collection this design used decorative wall paper, with luxe brocades in subtle pastel colours and hints of brilliant gold.

Broken pieces of jewellery, shells, pearls, chains, buttons and even old pieces of furniture combine to create a unique dress in the shape of a jewellery box.

The shoes are highly embellished with strips of pearls in metallic tones and the forever piece statement necklace is draped across a bare décolletage.

As part of winning the title of Junk Kouture Eastern Winner 2017, the students of Coláiste Rís appeared on the Late Late Show on Friday night, Emma Duffy was interviewed by Ryan Tubridy and explained the design is used to promote mental health awareness.

The designers of Pandora’s Box recognise that the pearl has become a metaphor for something rare, fine, admirable, valuable and unique and inside the oyster shell is a shiny pearl, different in colour, shape and size, just like humans where it’s important to open the box and display the emotions inside. With over 52 thousand views on Facebook it is evident that these students are succeeding in delivering this message nationwide.

Emma, Chloe and Grainne together with their teacher Ms. Mardeen Mc Caughey would like to take this opportunity to Thank everyone for the immense amount of support they have recieved.

The three Coláiste Rís students and Ms.Mc Caughey have won an all expenses paid trip to France where Pandora’s Box will appear on the red carpet at the opening of the Cannes Film Festival later this Month.