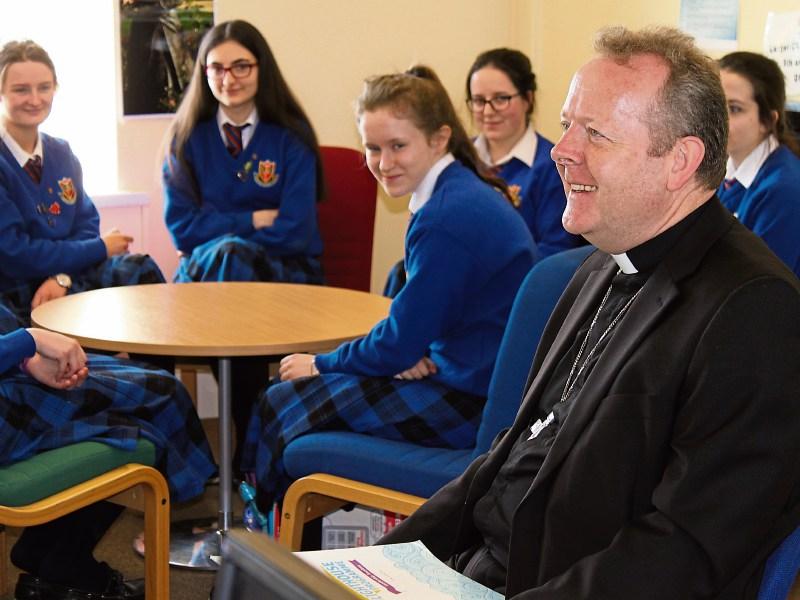 His first port of call was the beautiful St Vincent’s school chapel where he heard a marvellous rendition of ‘Seek ye First’ by the school’s chamber choir, led by Mr Stephen Hennessey, a hymn close to the Archbishop’s heart as it was the college anthem in St Columb's College, Derry, where he was a former President.

Archbishop Eamon met with Lighthouse Leaders. TheArchbishop listened to the students as they shared stories of their learning and the nurturing of their faith and leadership while participating in the Lighthouse leadership programme.

The lighthouse programme is a Faith and Leadership peer ministry programme where the leaders having first trained to be servant leaders went to Realt Na Mara primary school and led a Confirmation preparation module with 53 sixth class pupils.

The programme took place over a five month period and culminated in the Confirmation ceremony with Archbishop Eamon.

Genuinely impressed with the student’s words, Archbishop Eamon shared his own faith story and how the words of Pope John Paul II on his visit to Ireland had inspired him to become a priest.

Archbishop Eamon told the students that he wasimpressed with their sharing and the confidence they displayed while discussing faith as well as the impact the programme had made on their faith development and leadership skills. Having thanked the students, Archbishop Eamon prayed with them. This was a particularly special moment of the Archbishop’s visit said Dr Walsh, Deputy Principal who had developed the Lighthouse Programme for students.

Archbishop Eamon also visited a number of classes in action.

He discussed teaching and learning with an iPad and shared his love of technology with Ms McGrory’s Science classwhere the students embrace their learning using the interactive technology of an iPad. He told the students that he is working hard to be ‘paper-free’ and uses his iPad for all talks and lectures without a printer!

He then joined Mr McAteer’ssenior RE class and enjoyed a discussion on the Gospel story ‘The Road to Emmaus’ that was introduced in a digitally animated format.

In a reception with the teaching staff, The Principal, Mrs Deirdre Matthews thanked Archbishop Eamon for his gentle presence in the school during his visit, and the genuine interest he had shown in the work of the school. She presented him with a piece of art by Ms Cathy McKeown, an inspired artist and recent St Vincent’s past pupil.

She wished him well in his work as leader of the church. Archbishop Eamon graciously received her best wishes and spoke of how the St Vincent’s school ethos had been genuinely communicated over the course of his visit.

He thanked the teaching staff for the great work that they do in education and wished them well for the weeks ahead.

It was agreed by many who met Archbishop that he is indeed ‘a gentle presence who listened and shared in such a blessed and gracious manner’.