MICHEÁL MARTIN: Dundalk is suffering due to a 'two-tier' economy 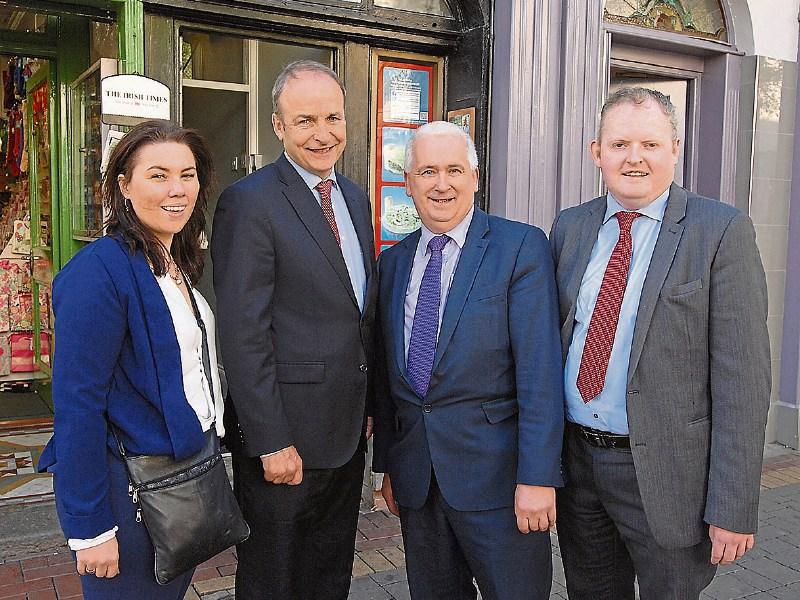 Dundalk is suffering as a result of Ireland’s two-tier economy, says Micheál Martin.

The Fianna Fáil leader believes regional towns are being neglected in favour of big-city investment, and reckons more needs to be done to redress the balance.

“It’s a sense that I get from people whenever I leave Dublin,” he told The Democrat upon his visit to Louth on Friday.

“We’re in the midst of an economy which is developing in a very lopsided manner, one which puts a premium on cities and ignores regional areas.

“Spending time in Dundalk today I got that impression, people outlining the need for more investment in the town.

“Michael Gaynor spoke to me about issues spawning from the Living City Initiative and the need to improve footfall and conditions for local traders. It’s a reality which is true across the north-east where there is a particular need for industrial jobs, and one which is likely to be even more keenly felt once the full repercussions of Brexit emerge.

“We’ve already seen the effect that the falling sterling has had in that respect, with everything from agri-food industries and tourism feeling the pinch.

“The hope would be that the impact of Brexit can be mitigated somewhat if Britain makes a firm decision to remain in the customs union and opts against a hard border, thus enabling our companies to operate tariff-free.

“€5 billion is currently in play when it comes to north-south trade and - with several formal and informal border crossings occurring daily in this region - it’s for that reason that Fianna Fail is pushing for special economic zones to safeguard towns like Dundalk.

“We have also long since noted the potential need to seek contingencies from Europe to help our indigenous companies through what is likely to be a rocky transition, sending the message to Brussels that state aid may indeed be required to that end.

“Furthermore, Louth TD Declan Breathnach is serving as our spokesperson on the border, and we are currently putting together an initiative which centres on the prospect of a United Ireland and what it might look like in the present climate. The party feels that the potential of the Good Friday Agreement hasn’t been optimised, and we will be aiming to liaise more effectively with the North going forward.”

Mr Martin was speaking ahead of a function for recently retired party member Séamus Kirk. The Knockbridge resident served as TD for Louth for 24 years, while also assuming the role of Ceann Comhairle in Dáil Eireann.

“He is a gentleman to his fingertips”, said Mr Martin of his retired colleague.

“He’s a very steady kind of person who always managed to, in the midst of any crisis, have a calming and knowledgeable impact. Seamus could always see both sides of the debate, bringing a degree of perspective, all with a view to developing unity and consensus.

“After the 2011 General Election he was a huge source of strength, someone who offered inestimable support to myself at a time when the party was facing unprecedented difficulties and challenges with only 20 TDs across the country.

“I now use Séamus very much as the model of the way Fianna Fáil will seek to develop public representatives going forward, people of unwavering character whose priorities are rooted in community.”

The perceived lack of grassroots engagement with the present political class is one showcased not only in Ireland but across the world, France's election season once again speaking for this ongoing sense of turbulence.

For Mr Martin, the new era of disenfranchisement stems from a distrust among voters that the old governmental model can still deliver.

“From being out and about, it’s clear that people are a bit disillusioned by the political narrative at the moment.

“In Ireland, housing is an obvious example. The line is being peddled that billions are being made available, yet the upswing isn’t being felt by people on the street.

“Government strategists are saying that emergency housing will be gone by next July, and yet, in the Capuchin Day Care centre, the number of people availing of services has gone up by 76% over the last three years.

“For those in rural areas, issues like broadband are also a persistent concern. The lack of provision in outer regions is hindering not only existing companies but also preventing any new companies from being set up. More interaction is needed to ensure that government officials and those whom they are serving can get back on the same page.”

According to the Fianna Fáil leader, one of the prime roadblocks to increased engagement in that respect is the ongoing turbulence at Fine Gael, with stories surrounding the impending leadership debates very much taking precedence in the news cycle.

“It has definitely caused the issues to take a back seat, pressing matters such as health being put on the backburner.

“This internal angst within Fine Gael has hindered any prospect for progress since the General Election. The party never let Enda Kenny settle down as Taoiseach, always nibbling away and undermining him. It has meant that the government’s legislative output has been very poor, leading to a state of inertia taking over at state level.

“While all of this remains up in the air, Fianna Fáil will be working hard to rebalance economic development at the coalface, remaining absolutely determined to redirect economic activity to towns like this one.”