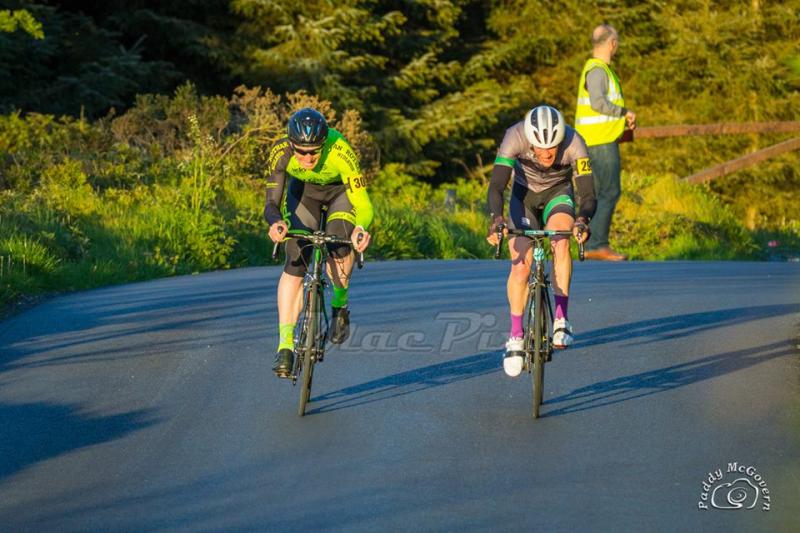 Round 5 of the Bike Station Summer Cycling League was the most feared route on the circuit, going from the Sportsman's out to Carlingford, through Omeath and finally turning left at Davy's Pub for the Flagstaff climb.

As if finishing up the tough climb wasn't sufficient punishment, Thursday last saw the riders battered by strong winds.

In Race 1, by Lordship the three groups had come together, then after the turn for Carlingford Bryan McCrystal made a solo attack and a chase group of Ray O`Shaughnessey, Alan Bingham, Liam Dolan, Gary Gorman and Alan Gray had formed. This group worked hard to close up to the lone leader, but by the time he made the turn to start the climb McCrystal had a gap of 30 seconds.

On the climb Liam Dolan did manage to bridge across to MyCrystal and the two riders had a close fought sprint, which McCrystal edged out. OShaughnessey came home in 3rd position.

In Race 2 Philip Patterson of Cuchulainn Cycling Club was victorious having worked extremely hard to hold off the challenge of Philip Patterson, who rides for Armagh Down Cycling Club. Martin Harvey was the final rider on the podium, coming home just ahead of Jamie O`Hare and Laura O`Driscoll

Round 6 is another tough course which sees the riders race 40km on an undulating circuit in Ravensdale.