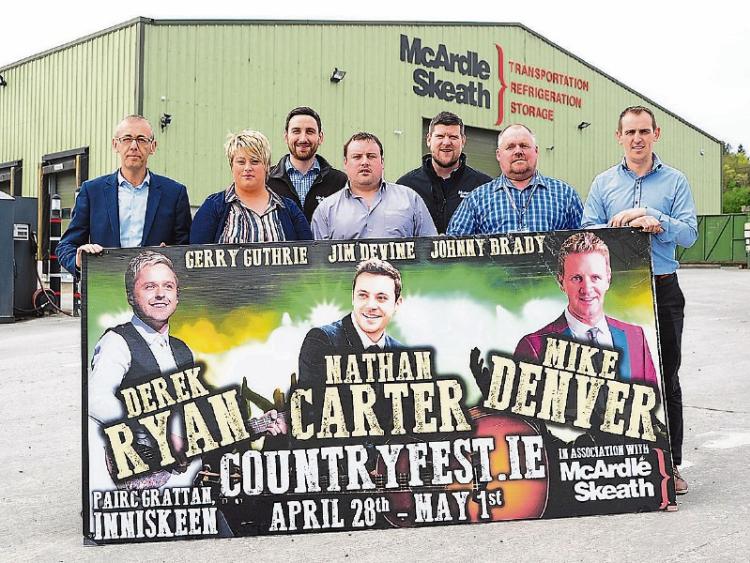 This press release was kindly set up by main Sponsor Mc Ardle Skeath, who officially announced its commitment for another 3 years of sponsorship to an event that now attracts massive tourists to the area annually.

According to Paul Meegan of Countryfest.ie, having Mc Ardle Skeath for another 3 years is indicative of the event’s stature on the national country music scene and we would like to thank them for the continued support.

Countryfest.ie is now in its 8th year and each year the event is continuing to deliver the best in country music and entertainment.

Located on the expansive grounds of Inniskeen's Pairc Grattan in south Monaghan, Countryfest.ie showcases the biggest names of Irish Country music along with exceptional value.

The event also continues to create a tourism boost for the region with many visitors coming from all over Ireland and even in some cases from the UK to see Ireland’s leading country music stars. The event sees hotels and B&B’s booked out over this weekend in south Monaghan, south Armagh and North Louth and creates an economic boost to the region in general.

This year see’s the event teamed up with The Nuemore Hotel which is offering exceptional accommodation packages are available through the relevant links on www.countryfest.ie

Countryfest.ie is now considered a national event but the organisers continue to support the local community.

The event continues to make contributions to other local organisations such as Carrick Cancer and Steadfast house, SOSAD and many more. Spokesperson for Countryfest.ie, Paul Meegan stated that the event is for the whole region to enjoy and we like to repay the local communities with various contributions to thank them for their continued support.

This year’s festival kicks off on Friday 28th of April with a debut for the hugely popular Derek Ryan playing centre stage with Gerry Guthrie playing before him.

Saturday the 29th of April see’s and all star line up with Jim Devine starting things off, followed by Irelands hottest act Nathan Carter performing live in the marquee.

Finishing off the bank holiday weekend on Sunday the 30st is another massive night’s entertainment starting with Johnny Brady and finishing off with the legend himself Mike Denver. One new addition to the event this year will also see one lucky winner go home with a Trip for 2 to Portugal for a country music week in the sun. This will take place over the festival weekend and promises to be another big hit. Admission is available on the door each night or check out www.countryfest.ie for ticket information.