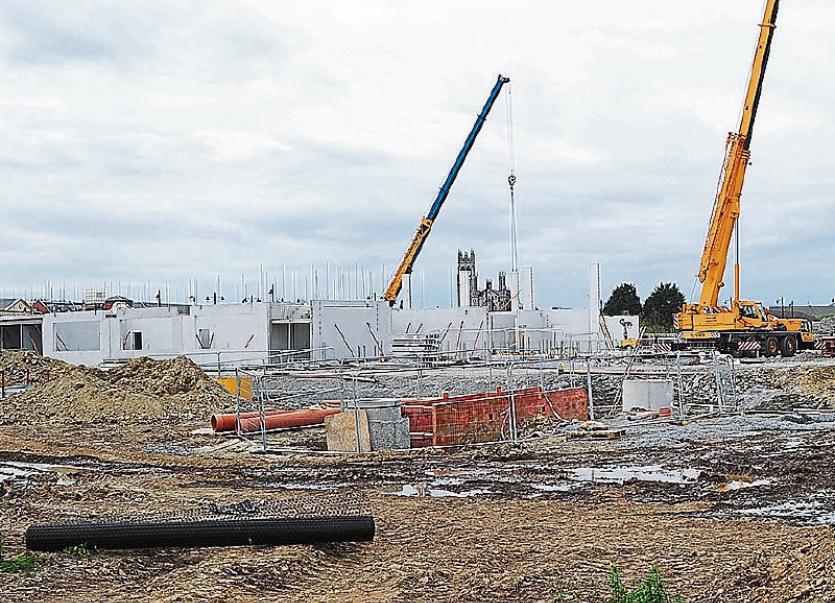 Working is motoring ahead on the Colaiste Chú Chulainn at its site on Marshes.

As can be seen from these photographs, walls are already starting to go up.

The Minister for Education & Skills, Richard Bruton T.D attended the turning of the sod at Coláiste Chú Chulainn yesterday (Monday).

The delivery of this project is a key action in the Government’s Action Plan for Education, which aims to make the Irish education and training system the best in Europe within a decade.

A contract for in excess of €16m for the construction of a new 1000-pupil post-primary school building for Coláiste Chú Chulainn was signed in January.

The school is located on lands opposite the Marshes Shopping Centre and will provide state of the art facilities for the pupils and teachers. The accommodation being provided will also include a two-classroom ASD Unit.

The Contractor is Ganson Building and Civil Engineering Contractors Ltd, who are based in Balbriggan and they were represented by David Rogers, Company Director.

Site clearance work commenced shortly before Christmas and it is expected that works will be completed by the summer of 2018 with pupils taking up occupation in September of that year.

Funding for the new school, which operates under the patronage of the Louth and Meath Education and Training Board, is being provided by the Department of Education and Skills with Louth County Council managing the construction of the school building on the Department’s behalf.

A new public park and playground will be provided as part of the contract.

The Minister for Education and Skills, Richard Bruton TD, said that he was delighted that this project had now gone to construction.

“Under the Government’s Action Plan for Education, which aims to make Ireland the best Education and training system in Europe within a decade, we will invest hundreds of millions to provide thousands of new school places in state of the art facilities. Students in Louth will benefit from the opportunity to learn in new and improved teaching spaces and modern educational facilities built to a very high standard.”

The Minister thanked Louth County Council for delivering the project on the Department’s behalf. He commended the inter-agency co-operation between his Department and Louth County Council for the delivery of a major piece of infrastructural provision which, will not alone be of enormous benefit to its pupils, teachers and parents but also to the wider community in Dundalk.