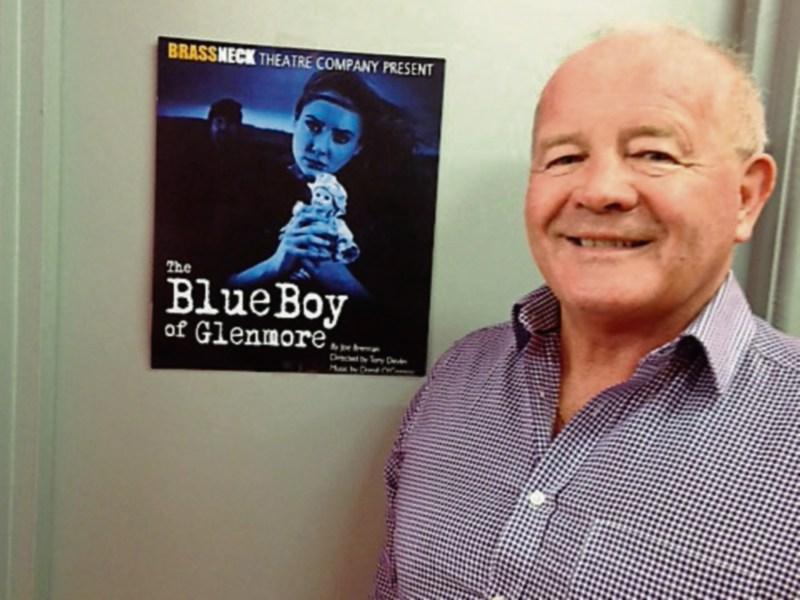 Warrenpoint playwright Joe Brennan has penned a new play with a local flavour. ‘The Blue Boy of Glenmore’ is a dark comedy set in the Cooley Mountains, (Circa 1977.)

Sixty-two-year-old Brennan only began his writing career five years ago after a long and varied working life which took him from working as a watchmaker in Belfast through to a meat factory worker in Ravensdale and then to construction work in London.

He also set up a fish factory in Warrenpoint which he sold and is now a property developer.

Joe’s first play, ‘The Sweety Bottle’, was a huge hit; it played to packed houses on a tour of Northern Ireland and was the first play ever to transfer from the Baby Grand to The Main Stage in the Belfast Grand Opera House.

Joe wrote the play along with his son Gerard Brennan who is an established crime novelist.

Joe spoke to the Dundalk Democrat telling us how he got the idea for his current play.

“My wife Rosemary is from Omeath and we lived there in the late seventies and early eighties.

“I would drive through Glenmore on my way to work in Dundalk every day and remember vividly the beautiful scenery in the mornings and on misty winter evenings the eerie ambience of the place.

“It is a perfect setting for a story. There was a farmer there who had a similar nick name to the play but other than that the rest is complete fiction”.

Jemmy John McArdle is The Blue Boy and he lives with his sister Colleen in the family farmhouse.

Jemmy is content to work the farm tending the cattle and the sheep and wants nothing more.

The farm, the glen and the mountain are his whole life. Colleen does not share Jemmy’s views and wants a better life, she has taken to studying and hopes to get a career from her studies but Jemmy is having none of it. This sibling rivalry is the catalyst which ignites the terrible events that follow.

Joe spoke of his first play - The Sweety Bottle - describing it as a madcap escapade of jokes and laughter and that although there is humour in The Blue Boy it is much darker.

“I enjoyed writing The Sweety Bottle but it was really pure entertainment.

“The Blue Boy is entertaining but I also wanted to get a message across. In the seventies women in Ireland and particularly in rural Ireland were dealt a very poor hand.

“It was not until 1976 that women were granted equal pay, in the seventies women who worked in the civil service and the banks, would be forced to resign when they got married.

“The father had the sole right to collect the family allowance and it was only at his behest that the mother could do so.

“A woman would be branded a disgrace if she went in to a pub unaccompanied and if a woman asked for a pint she would be refused and given two half pints.

“A lot of women found themselves in difficult circumstances and relationships and could not bring themselves to do something about it until it was too late.

“The hill farmers in Ireland are a tough hard working breed but when times were hard it was the women who were the backbone of these communities.

“It was they who stood up to the mark.

“I would like to think that my play reflects on these matters and that it might help someone in a bad situation to consider their position and do something about it before it is too late.

“I asked Joe if he thought that his late start in his writing career was a disadvantage and he gave me a resounding ‘no’!

“He said it was, being able to draw on the diversity of his life and his experiences that gave him the edge on his writing.

The Blue Boy of Glenmore plays in The Four Seasons in Carlingford on Sunday the 7th of May.