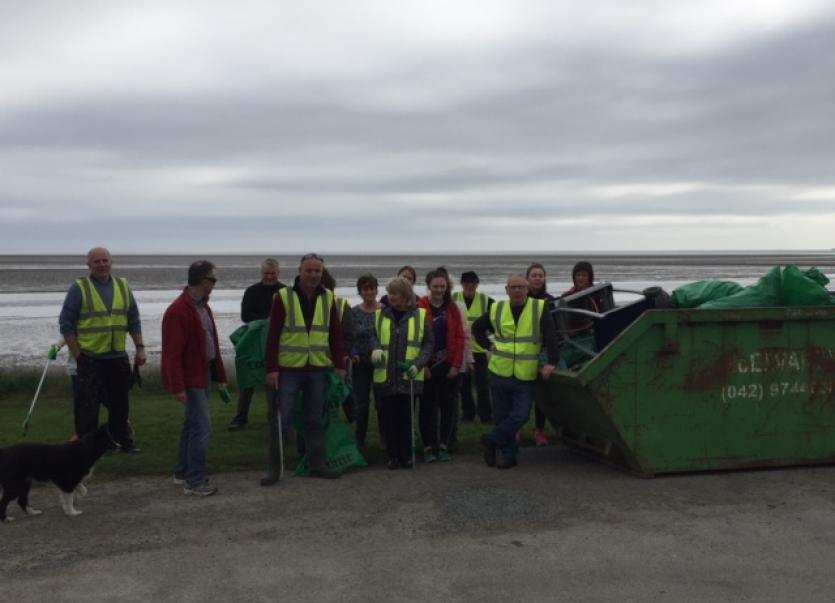 Seabank, the stretch of coastline that links Dromiskin and Castlebellingham is surely one of the hidden gems in Mid Louth and offers a speculator views and a safe walking route for locals and visitors alike.

Unfortunately its relatively remote location also offers the potential for indiscriminate littering and illegal dumping. The Tidy Towns groups in Castlebellingham and Dromiskin joined forces last Saturday morning to carry out a major litter blitz which saw 46 large bags of illegally disposed material removed by the volunteers as well as an unbelievable 17 tyres which had been dumped by somebody with no regard for the local environment.

Other isolated pieces of waste ensured that the skip provided by Louth County Council was full to the brim on conclusion of the 1 ½ hour long clean-up.
Local Councillor Liam Reilly, who is also Secretary of Dromiskin Tidy Towns, commented “it is really disappointing to see that some people feel it is appropriate to dispose of their waste along our beautiful coastline but the response this morning from both Tidy Towns groups was quite remarkable and shows that, despite the friendly rivalry that might exist at competition time, Tidy Towns volunteers don’t recognise boundaries when it comes to looking after their local environment”.

Particular thanks must go to Margaret Mc Fadden from Castlebellingham whose idea it was to organise the co-ordinated clean-up and who provided a welcome cuppa for the hard working volunteers.

Seabank is now sparkling clean and we a can only hope that it will remain so and we have no doubt that the hard working Litter Wardens in Louth County Council will keep an eye on the area to ensure that it doesn’t become the subject of on-going dumping.