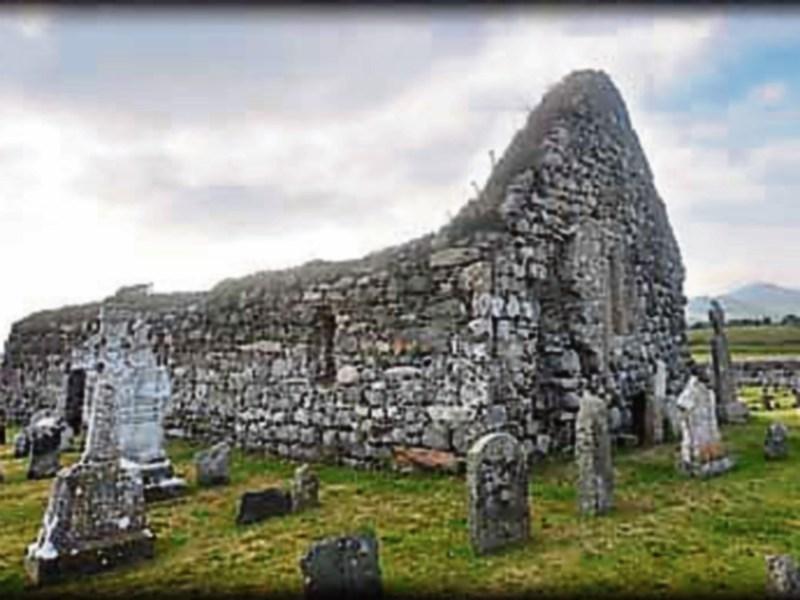 KILWIRRA Cemetery is the subject of an in depth study by Cooley Genealogical and Historical Society. The Kilwirra Project will list all present families in the cemetery coupled with forgotten people who are interred on the site inside and outside of the walls. The purpose of this exercise is to find people who are not listed on the headstone or have no headstone.

Kilwirra cemetery is located in Templetown, Cooley, which is part of the Knights Templar settlement since they arrived here in circa 1250. It is unique in that it is the oldest of the original cemeteries for the Cooley Peninsula for the two parishes of Carlingford, Cooley and beyond since the 13th century.

They will be plotted and numbered where plots will be linked to other deceased relatives in the cemetery. It is then up to the family concerned whether they would like them included in the Memorial Book.

The present cemeteries in use are Boher and Grange where the descendants of the present population are interred. They are modern cemeteries of the late fifties/early sixties. Each of the cemeteries will be plotted and a link will made back to Kilwirra in chronological order, so that from a genealogical point of view, a link will be made which can continue for generations to come.

The end result will be to link up all families so that everybody is recorded especially the forgotten. The process could be carried on for future generations.

From a genealogical point of view, the books could be given to anybody visiting the area who are trying to locate their relatives. The books could also begin a process where everybody could be linked ‘almost by blood’ in the parish. A sheet will also be included which will include cause of death where family diseases can be recorded which could also monitor diseases for future generations plus blood types. The living can benefit from their dead ancestors without a drop of blood being spilled.

It is hoped to box the books and include a template for all family memorabilia to record the present generation plus copies for future generations where each family can record their own family Genealogy.

During the Famine many people were interred in Kilwirra who are long forgotten. These people lived in a time when the rich worried about their money and the poor worried about their bread. Every single step that we take we thread on people whose dreams were also real. They were erudite and ingenious people in their own inimitable way whose human capacity for survival was awesome! This process will help in some small way to ameliorate the melancholy which prevails when people grow old to remember their family in a tangible way. It also gives people the opportunity and means to recognise those who have passed on in poorer times where families did not have the means or support to commemorate their ancestors. To live in the heart we leave behind is not to die!

IF ANYBODY NEEDS FAMILY PEDIGREE SHEETS TO RECORD THEIR DEAD, PLEASE RING 0851833110

The cars are parked and they ascend the hill

They huddle together in a cold Templar ruin very still

They switch off all their mobiles and stand erect

The dawn mass is about to take place

They come from North, South, East and West,

As they visit the souls who have found sweet rest

One wonders if the residents would be seduced

by their outward appearance and unfulfilled desires

An aeroplane circles and interrupts the prayers

After a hard working week and Sunday rest

This generation presents an admirable sight in Templetown in their Sunday best!

They gather at the Dawn Mass and Ladywell every year

where parishioners celebrate unknown relations who they hold dear

where they too hear the heavenly music as their relatives prance

Some believed they would live forever

They thought they were mighty and strong

Now they rest under a slab in Kilwirra

Where some thought they would last forever but they were wrong

We know their homes were filled with love

Because you always found God spoken of

And so we will never, never

Be afraid to die,

Up in the sky!