Philomena was always a fun-loving, kind and witty person 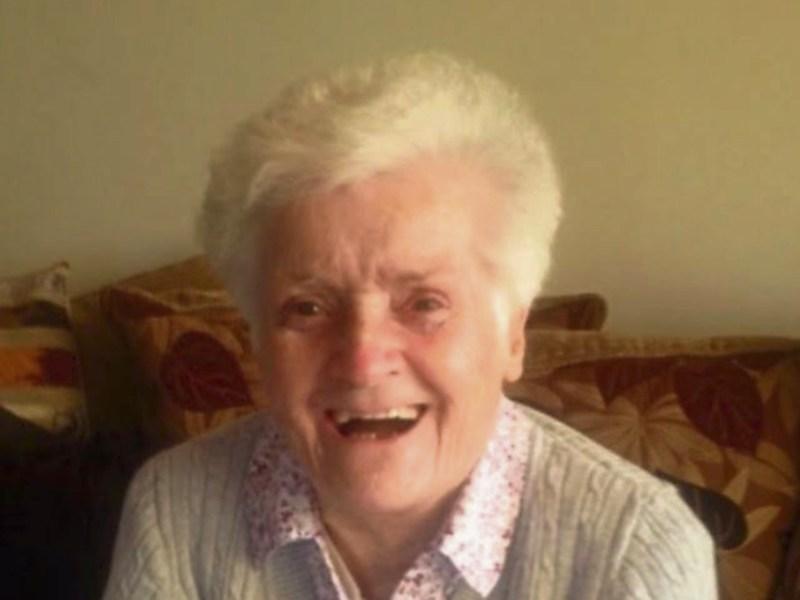 Philomena Nolan who died peacefully on February 18 last at Moorehall Nursing Home, Ardee was a fun loving, kind and very witty lady whose company people loved and retained that charisma even as her health declined.

Formerly Miss McGivern, she hailed from Warrenpoint but her family moved to Dundalk, and were among the first residents of the then new Pearse Park estate. She grew up in town, and attended Saint Vincent’s School.

She went to work at 14, taking up employment in the shoe industry in Rawsons and Halliday’s factories and later worked in Weyenberg.

She continued to work following her marriage.

She met John Nolan from Forkhill at a local dance. Dancing was a favourite pastime that the couple shared.

It was something that she looked forward to doing again with her husband after she died, told granddaughter Triona at her funeral Mass in a fond recollection of her funny, witty and kind grandmother who people loved being around.

John’s passing in 1993 was a devastating time for Philomena, as they were such a close and united couple who did everything together.

She moved to Ard Easmuinn to live with their only son, Paddy and daughter-in-law Kathy after John’s death.

The progression of Alzheimer disease necessitated that she required full-time specialist care and spent the last four and a half years in the Alzheimer’s unit in Moorehall Lodge in Ardee.

Nevertheless she retained her fun loving nature and was the life and soul of the place with her love of music and dancing and earned special affection among the staff most of whom attended her wake and funeral.

She was very active earlier in life. She loved walking and cycling, which gave her the opportunity to interact with people, stopping to talk with her friendly, sociable disposition.

She and John spent ten years in Coventry as they emigrated to England in search of a better life after their marriage with work scarce in their own country. On their return to Dundalk, they set-up home in Cedarwood Park, with John obtaining employment in PJ Carrolls, the cigar and cigarette manufacturers who ceased operations in recent years.

John worked at the original headquarters in Church Street and then transferred to the company’s brand new factory on the Dublin Road, which now is occupied by the Dundalk Institute of Technology’s School of Creative Arts, Media and Music.

He continued to work there until his retirement. It was just four years into retirement, when he sadly passed away.

After reposing at the residence of her son Paddy in Ard Easmuinn, Philomena was taken on the Tuesday morning to The Church of The Holy Redeemer. Rev Paul Montague celebrated Requiem Mass and gave the eulogy, and Pastor Andy Nugent of Dundalk community church, also spoke on the life of Phil and her eternal resting place in Heaven.

The Readings were given by granddaughter, Anna and great-granddaughter, Ellen. Anna along with her husband, Jonathan led the Prayers of the Faithful. Granddaughter Tríona shared her stories and memories of her nanny, “who is now dancing with granddad in Heaven”, she stated.

Phil’s great-granddaughter (Tríona’s daughter) Elahna, read stories from a memory book that put a smile on peoples faces as they listened and recalled Phil’s humour, sharing memories from her grandsons who live in America.

Friend, Mary Murphy and niece Shirley Bellew brought up the Offertory gifts, while the music was provided by Trisha Nugent and Tríona’s husband, Fu Faapito, both of Dundalk community church.