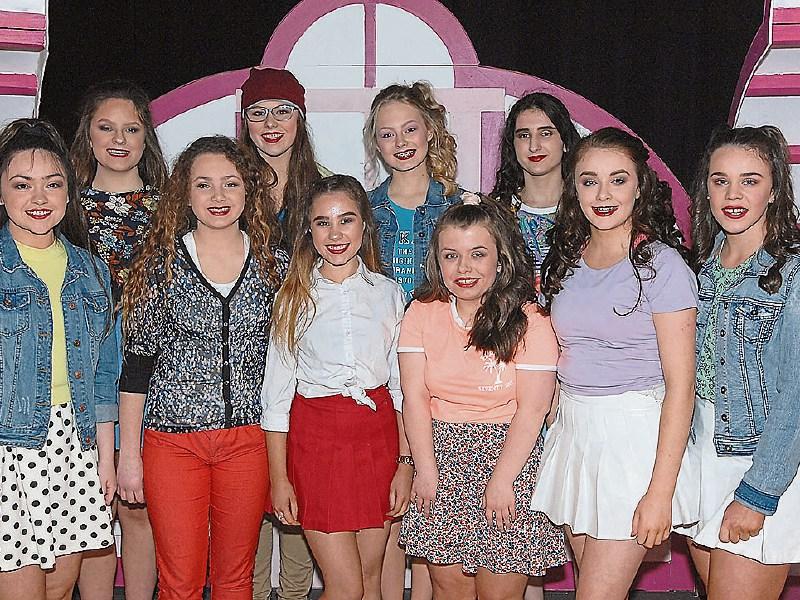 In September a new musical production team made up of Marie Meehan, Selena Reynolds and Jenny Spain took on the task of choosing a show and a cast for the TY (Transition year) Class of 2017.

No stranger to the stage herself, Marie Meehan has been involved in musicals both on and off stage since 1992.

"I love the process of planning, auditioning and rehearsing and the whole buzz of getting a show to the stage. I can see such confidence in all our students, not just those with leading roles."

Each year the school musical provides our students with the opportunity to develop socially, personally and artistically. By the time the curtain closes there will have been new friendships forged and of course lots of fun had by all.

Legally Blonde is a musical with lyrics by Laurence O'Keefe and Nell Benjamin and book by Heather Hach.

The story is based on a novel by Amanda Brown and the 2001 film of the same name. It tells the story of Elle Woods, a sorority girl who enrols at Harvard Law School to win back her ex-boyfriend. She discovers how her knowledge of the law can help others, and successfully defends exercise queen Brooke Wyndham in a murder trial. Throughout the show, no one has faith in Elle , but she manages to surprise them when she defies expectations while staying true to herself.

Hannah Mullen is playing the part of Elle in her first major role, although she has been performing on stage since she was six.

"It's such a huge honour to be given such a big part but everyone is equally important in this show. Without us all it wouldn't happen."

Clodagh Shine is very excited to be involved. "I’ve loved musicals all of my life, my favourites being “Hamilton” and “Aladdin”. I am also a member of The Cross Border Orchestra. I was over the moon when I heard I had been picked to play Vivienne. She is very confident, serious and assured, but you can also sense a bit of insecurity because she feels threatened by Elle! She is very career-minded therefore she doesn't socialise, she networks. I’m very excited to bring Vivienne to life!"

Amy Tuite has loved music all her life and is another cast member. "I was thrilled to be finally taking part in our TY musical 'Legally Blonde' and over the moon when I was chosen to play the role of Paulette. I love her character, and her goofy personality is quite similar to my own! I’ve taken part in many talent competitions growing up and have had plenty of experiences on stage, but I have no doubt that this will be one of the best. I hope everyone enjoys watching the show as much as we have performing."

Jenny Spain feels one of the greatest benefits of staging a TY show is that you have girls on the stage who have never been there before. "So many have never had the opportunity to learn dance moves and choreography, or had the chance to be on stage.

This is an extension of our ethos. Every girl takes part in the heats of 'Search for a Star' and this is another chance for them to experience the thrill of live performance, which is such a positive life experience."

Aoife Holmes is one of those students.

"I have never been involved in anything like this before. When I came into TY I didn’t think that I would ever end up on a stage. I started TY with the goal of trying as many new things that are outside of my comfort zone as possible and I think that so far I have stuck to that. I am really looking forward to the show but I am also really nervous."

Áine Mc Enaney, who has been involved in all five of the recent TY productions as set designer and co-ordinator feels nerves are no bad thing.

"I see the girls every year backstage in the first night. They are all so nervous but once they get up on stage they forget who they are and become their characters. I so delighted to be involved again this year. We have some fabulous sets hired in this year to enhance our own stage set so I'm hoping audiences will be blown away by that."

Tickets are on sale in the school are priced €12. The show runs from Tuesday 14th to Thursday 16th of March so make sure to get yours as quickly as you can!