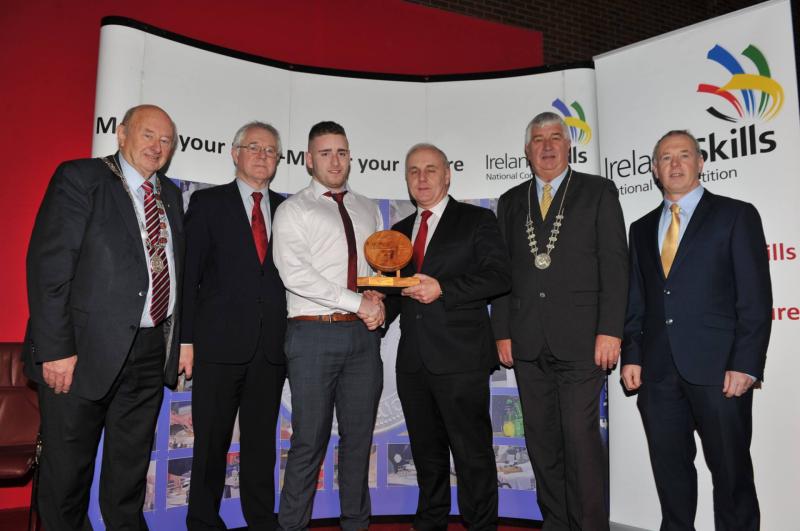 Ardee man James McSwiney has scooped one of the top awards at the IrelandSkills finals for 2017 in Cork.

James is a joinery apprentice at Sligo IT, and is currently employed by the international Construction Company John Sisk & Sons, headquartered in Dublin. His craft skills were rewarded when he claimed first place and the prestigious Silver Medal for joinery at the national finals which were held at Cork Institute of Technology.

The IrelandSkills National Compeititon, which has been running since 1957, promotes the pursuit of excellence and high level skills that are central to Ireland's economic success and development. The competition disciplines range from aircraft maintenance to welding.

In each of the categories, competitors had to come through exhaustive preliminary qualifying phases at regional events across Ireland.

In the joinery final, James and his fellow apprentices worked from a detailed set of drawings to set out and make an intricate arched door from scratch within a maximum time limit of 19 hours.

“It was challenging but exhilarating,” said a delighted James. “The win came as a shock. But we put a lot of time into it spending most weekends training with John Joe (his mentor) and my work were good too in that they gave me time to prepare as the event got closer.”

James’s success continues a proud tradition IT Sligo success at the IrelandSkills final. It is the institute’s 16th national winner in carpentry and joinery since 2000.

He was trained at IT Sligo for the IrelandSkills final by Institute lecturer John Joe O’Reilly, who is himself a former Ireland Skills joinery winner and has been the Ireland Skills Joinery Chief Examiner since 2009.

“We are delighted that so many of our students are helping to set the standard for excellence in workmanship,” said John Joe. “This competition attracts the best young trainee crafts persons from around the country and provides a showcase for the training and development of highly skilled crafts persons within the Irish education system.”

James’s success now provides him with a platform to compete on the international stage as he will now have the opportunity to gain selection for the Ireland team which competes at the WorldSkills Finals in Abu Dhabi next October.

James’s success continues a strong IT Sligo tradition in recent years. In 2015, another IT Sligo apprentice Daniel Murphy finished sixth overall at the WorldSkills finals held in Sao Paulo, Brazil.

Other notable performances by IT Sligo students at the IrelandSkills 2017 finals included Baileborough’s Liam Meehan who collected second place in the carpentry final. Liam is a second-year Advanced Wood & Sustainable Building degree student.
Another student from the same course, Shane Kennedy from Chaffpool, Tubbercurry, and apprentice Paul Kearney from Bracknagh, Co Offaly were also finalists in the joinery competition.

“The Institute was extremely proud to have two national finalists from the Advanced Wood & Sustainable Building programme,” says John Joe. “Liam and Shane’s success reflects the quality of the course they are studying. Liam is now in contention to represent Ireland in Abu Dhabi later this year, while Shane is young enough to compete again next year and has gained excellent experience from his participation.”

“Great credit must go to IT Sligo’s carpentry and joinery technicians Peter Gillespie, Colin Harte and support staff member Liam McCaffrey,” adds John Joe. “Their help and preparation behind the scenes made it so much easier for me to train the apprentices and for James and his colleagues to realise their potential.”