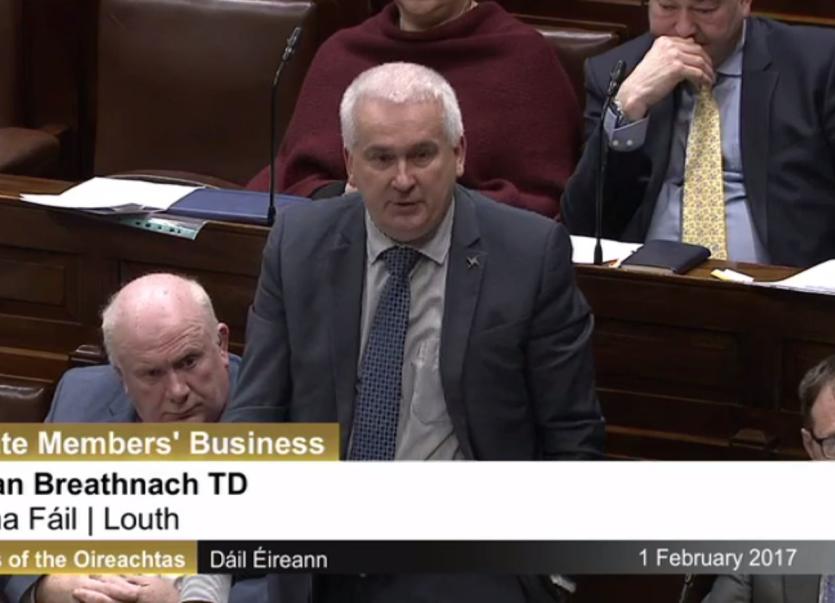 Fianna Fáil TD for Louth Meath Declan Breathnach has spoken in the Dáil this week on the appalling condition of our rural road network.

“In Co. Louth those living on less trafficked roads i.e. local, primary, secondary and tertiary roads are being treated as third class citizens who despite paying property tax, car tax, agricultural vehicle tax, development levies are not getting a fair share on spending in the areas where they live.”

“75% of all roads in County Louth are made up of 1,216 kms of local roads while national primary, national secondary and regional roads make up 25% - 356km.

“If you take the figure of tertiary roads in Louth alone is 386km – not one cent has been spent on pot hole repair not to mention re-surfacing for the last 3 years. This equates to 27% of all the roads in Co. Louth.”

“Based on the Department’s “Strategic Framework for Investment in Land Transport”, Louth is getting less than half of what is required for allocation for regional and local roads leaving us with a deficit of 6.8 million. The 2017 allocation of 5.18 million is being lauded as a welcome investment but these monies will continue to see our road infrastructure further deteriorate and make expensive to repair in the long term. In the interim many families experience broken springs, failed MOT’s tyre walls collapsing and cars being wrecked and all of this is alienating and frustrating both to motorists, cyclists and indeed the many pedestrians traversing these roads.

“The Corporate Plan in the County Council – outlines in relation to infrastructure that their aim is to maintain and improve the road network that is accessible, safe, smart and integrated and continue to deliver modern and sophisticated infrastructure providing ease of access for all the citizens of Louth.”

“This plan is aspirational and not achievable without proper funding. The CIS scheme has not been operated since 2014 when the input from residents for repair of local roads was 20% and now the scheme is opening up again but the input from residents is going up to 50%. Some people don’t have that kind of money to fork out for a service that they have already paid for through road and other taxes.”

“I have asked that realistic funding be made available for road infrastructure without further delay. “