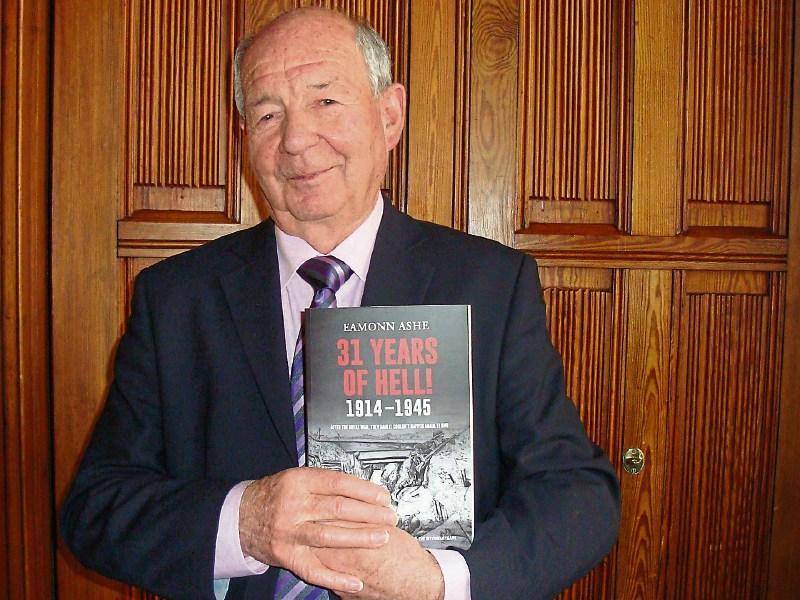 With 2017 marking the 100th anniversary of key World War I flashpoints — including the entry of the USA into the war and the notorious battle of Passchendaele — a new book by the grandson of a WWI war victim is well worth checking out.

31 Years of Hell! 1914–1945 by debut author Eamonn Ashe is a captivating concise history of the two world wars and the interwar years.

Described by Joe Duffy as “An incredible book. Beautifully-produced. A fantastic tome!”, this book is unique in covering the entire period from 1914–1945, and gives insight into how economic hardship and the rise of dictators during the interwar years led to World War II just twenty years after World War I.

It’s a fluid, easy-to-read book, which includes timelines and maps to simplify complex situations, and photographs which capture the emotions of the time period.

The book was a very personal project for the author Eamonn Ashe. His grandfather Joseph Phillips, a Company Sergeant Major in the Connaught Rangers, died on the fields of France on 21 March, 1918 during Germany’s Spring Offensive towards the end of World War I.

He is buried at Ste. Emilie Cemetery, Villers-Faucon, close to St. Quentin. In 1991, Eamonn brought his mother Phyllis Ashe there. It was her first and only time to visit her father’s grave.

The author has visited many war sites, including the Somme Battlefields, Anzac Cove and the Normandy Landings sites.

When he retired, Eamonn Ashe dedicated himself to writing this book.

He had an unusual schedule: he got up in the early hours of the morning every night and wrote for two hours.

The book represents a very special father-daughter collaboration: Eamonn’s daughter Fiona (born and bred in Drogheda) is the editor and publisher of the book.

Both feel honoured to have had the privilege of collaborating on such an amazing project! Fiona is a graduate of the New Media Factory in DkIT and trained entrepreneurs in the use of social media at the Regional Development Centre, DkIT.

She published the book through her Drogheda-based digital agency FlasheForward Communications.

The author Eamonn Ashe played rugby for Dundalk for 10 years. He was captain in 1968/69 and was on the team which won the Leinster Provincial Towns Cup in 1970.

The images on the cover of 31 Years of Hell! 1914–1945 were painted by Olive Eustace, who lives in Carlingford. She studied Fine Art in Limerick and Dublin. For much of her life, she lived on the same street in Drogheda as the book author, Eamonn Ashe, and was delighted to paint the images for the front and back of the book cover.

Speaking about becoming a published author, Eamonn says, "The visit with my mother to her father's grave sparked my desire to write this book. So I resolved to do it when I retired. Writing a concise book which covers such a long period of dramatic history was challenging. It took six years of intensive researching, writing and making personal sacrifices. I find the history of the wars fascinating and I'm delighted to share that fascination with readers of my book. I am very proud of this achievement! Having the book published is a dream come true for me!”