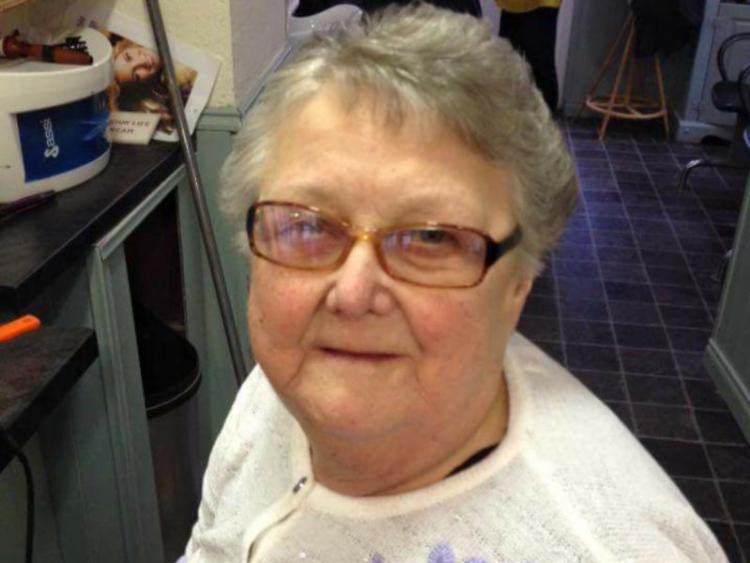 Teresa Rogan who died at Our Lady of Lourdes Hospital on January 3 led a very busy life which was her family, home and her work and caring for others with her job involving the care of the elderly and the sick.

She combined rearing a family of ten with working for many years in Saint Oliver Plunkett geriatric hospital and when she retired resumed work as a home carer for ten years until she was 70. Subsequently her health declined rapidly, suffering a number of problems and was in and out of hospital.

Her family are thankful to the staff of the Palliative Care unit in the Lourdes hospital Drogheda.

Teresa hailed from Tallanstown. She was the youngest of seven children of Margaret and John Malone.

Her parents also raised the three children, two sons and a daughter of her mother’s sister.

Teresa attended school in Tallanstown but she left education early with her mother taking ill, and she was needed to assist at home.

She moved to Dundalk to take up employment involving minding children. She met with Sam Rogan from the Quay Street area and they married in 1959 with Teresa then aged 20.

They set up home first in the Quay area.

They made several moves, residing in Pearse Park, and went to England where Sam obtained a job in the gas works but came home on holidays and never returned.

The family lived also in Barrack Street and for a long time in Oakland Park, Cox’s Demesne.

Husband Sam worked in a local chipboard enterprise in Quay Street, but his passion was fishing and Teresa often accompanied him at it.

With a large family to provide for Teresa went out to work to supplement the family income.

She was employed in the old Saint Oliver Plunkett Hospital on the Ardee Road from 1969 until it closed, and continued in the hospital’s employment when it was provided with a brand new building in the grounds of the Louth County Hospital.

Husband Sam took ill and she left to take care of him in the early 90s, and quit in 1998 when he died.

But she returned to work for ten years as a home carer employed by the HSE.

In the later stage of her life she enjoyed the social outlet of going to play bingo. She used to enjoy long walks taking in local scenic and holy places, walking out to Saint Brigid’s stream and a route round the Back of the Wall –the link road between the Carrickmacross and Castleblayney Roads.

She was a lady with a sense of adventure who enjoyed going to Tramore every year and trying out the amusements and her luck on the slot machines.

She would go on the machines that the faint hearted and those a lot younger wouldn’t and even when it wasn’t advisable for medical reasons.

She travelled to Lourdes in France and also went on bus trips to Mount Mellery and Knock.

She enjoyed concerts with her two favourite entertainers Brendan Grace and Daniel O’Donnell and also went to see Mrs Brown’s Boys perform in the Three Arena.

She followed Brendan O’Carroll and his family as well in the very popular comedy series on television, which occupied a lot of her leisure time.

She was a fan of the soaps, namely Coronation Street and Emmerdale, along with Judge Judy and Judge Reinder, and the Bullseye game show. Her pet dog Charlie was very loved by her and was an integral part of her family.

She was predeceased by her daughter, Rebecca along with husband, Sam.

Her sister Brigid aged 15 died in a tragic road accident.

Teresa reposed at her daughter Teresa’s residence at Grange Close from the Tuesday until the Thursday afternoon when she was taken to the Church of the Holy Family.

The Readings during the Mass were given by daughter-in-law, Mary and granddaughter, Regina.

The Prayers of the Faithful were led by daughter, Teresa Morrissey and granddaughters, Marie, Sarah Tricia and Laura.

Symbols of her life which included her bingo book and photographs of her dog Charlie and her favourite television programmes were presented at the altar by her daughter, Anne, great grandsons, John and Nathan, along with Aaron and granddaughter, Niamh.

The Offertory gifts were taken up by son, Jimmy and daughter, Emma, who also read a reflection.

The music was provided by Olivia Finnegan on the organ and singer Roisin Crawley.

Month’s Mind Mass is on Sunday, February 5 at 11am in the Holy Family Church.