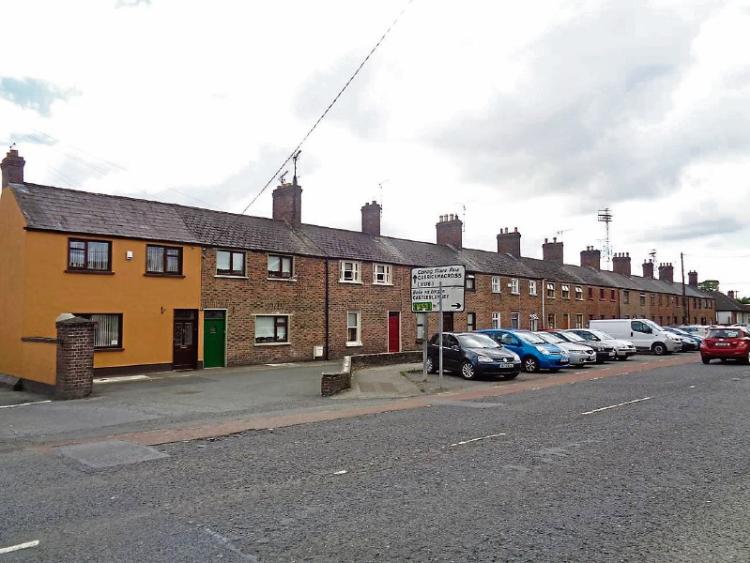 The yellow, red and black bricks of railway buildings in Dundalk provide a permanent link to the history of the Great Northern Railway (Ireland).

The GNRI was formed on 1 April 1876 when four separate railway lines and their respective companies amalgamated. Its central engineering works were established at the mid-point on the Dublin-Belfast Junction Railway Enterprise train line in Dundalk. The impact of this on the town’s architecture can be seen through the identifiable coloured brickwork used in its engineering works, residences and train station.

The GNRI’s first chief engineer was the Yorkshireman, William Hemingway Mills, appointed in 1876 and employed for 33 years. Mills was responsible for creating the GNRI’s brand of architectural style for the new railway company, and in turn created an identity: of company, place and people.

This article shall trace the evolution of the residential railway architecture in Dundalk which links the houses at Railway Terrace, Mounthamilton House, Brook Street and Ardee Terraces, Demesne Terrace, Hemingway House, and some earlier railway domestic buildings.

Houses were constructed on the fields of the original Roden Estate to house railway staff and so created a ‘Workmen’s Village’. Three buildings on Ardee Road are associated with the railway complex: two semi-detached Georgian-style two-storey houses, and one grey, detached single-gabled two-storey house. 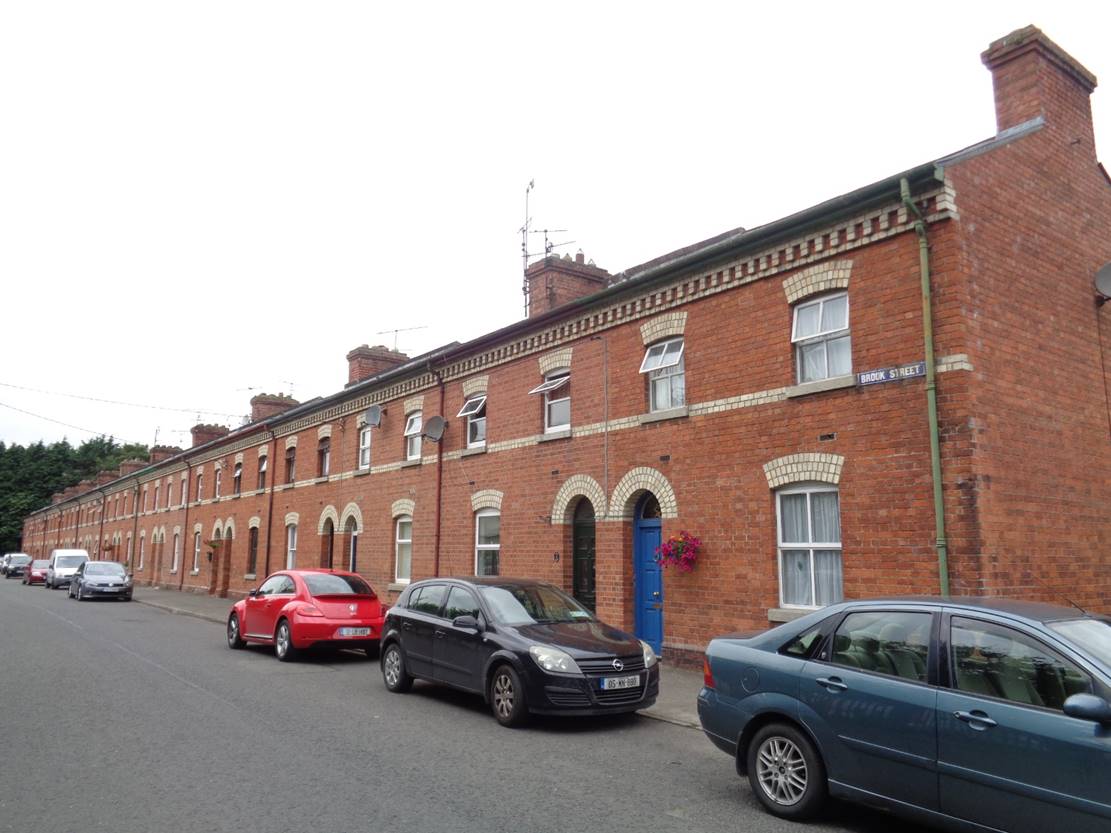 The two semi-detached houses are listed by the National Inventory of Architectural Heritage (NIAH) as being built c.1860 and ‘probably associated with Dundalk Railway Station’. Given their appearance and pure residential design, they were most likely not for public use but for senior railway employees, and their date links them with the original station which used to stand to the east of these buildings; its platform still exists today.

The “squared roughly coursed stone wall running eastwards to south of house… [gave] access to timber buildings once part of [the] railway”. In 1862, the Dublin Builder describes work undertaken ‘for the accommodation of the Irish North Western Railway [INWR] Company’: “A new and convenient store-yard, with store-house, carpenter’s workshop, and other accommodation, has been enclosed at Dundalk station”. These were probably the timber buildings behind the later-built Hemingway House, but one wonders why the accountant would have needed access to timber buildings? Do these structures still stand?

Other buildings associated with the earlier train companies are the workers’ cottages at Railway Terrace, accessed from Carrickmacross Road. Listed under ‘Dundalk Railway Station (Old)’ in the Directory of Irish Architecture, this row of 12 cottages was built c.1860. Surprisingly these are not protected structures, but their construction date and square windows correlate with the semi-detached houses on Ardee Road.

An 1863 Ordnance Survey map displays a train turn-table behind Railway Terrace, whilst a 1908 map shows paths from behind the houses leading southward toward the tracks, but no turn-table.

Located at the mid-point between Railway Terrace and the buildings on Ardee Road, is Mounthamilton House, believed to have been the original station master’s house. NIAH states it was built c.1870, but this is probably too late as the 1863 OS map shows its outline clearly beneath the train turn-table. It is also incorrectly listed at ‘Mount Hamilton House’. A 1908 map also shows a path from the front entrance of the house leading to the train tracks; this is now blocked.

The style of architecture chimes with that of the semi-detached houses on Ardee Road, with quoined exteriors and flat-fronted, Georgian windows. This house still stands and is currently used for Disabilities Services in Louth with access still gained next to Railway Terrace. This use of similar architectural styles marks an early establishment of connecting buildings by purpose, company and design. This practice continued with the GNRI, and it was Mills who continued this correlation.

The first houses built by the GNRI and designed by Mills were those at Ardee and Brook Street Terraces; two parallel rows of twenty terraced houses adjacent to the engineering works. Constructed simultaneously were two larger end-of-terrace semi-detached houses overlooking the works’ entrance: Brooklyn and Brook Ville. Plans signed by Mills dated 28 August 1880 show a proposed street layout with square outlines for the houses, backyards and WC units. An additional row was designed to be built to the south of Brook Street Terrace, but were not constructed as the land was ‘liable to flooding’ and became the ‘scrap yard’ of the works. These plans state that “these twenty houses to be built under first contract”, linking them with the construction of the initial engineering works. Both terraces are red-brick, two-storey with flat frontages, moulded coping and bonded window frames in yellow brick, which is also used on the rounded door hoods’ fanlights.

The addition of yellow adds an embellishment and identifiable feature to the terraces, linking them with the company’s engineering works and their later railway station; although Mills’ design for the new station is dated 1892, it seems that he was already planning a branding for the GNRI.

The exterior wall at Number 1 Brook Street Terrace displays etched names of past residents. These include the first residents: ‘J. McFeat 1899’, who was probably 13 year old John McFeat, whose father, also John, was an engine fitter at the works.

At the eastern end of the terraces are two semi-detached, larger houses; ‘Brook Ville’ and ‘Brooklyn’. Although these houses correlate in feature and material to the terraces, they are on a grander scale. With bay windows to north and south, the flat frontage faces the entrance to the works, suggesting surveillance, whether in practical or theoretical terms. Side bays are topped with projecting flat roofs, whilst the fronts have gabled pitched roofs with bargeboards. Quoins are pronounced in yellow brick, mirroring those at the works’ offices opposite and echoing the features of the earlier railway buildings. Door and window hoodings also use this same brick.

A later addition to the GNRI’s catalogue of residential architecture, Demesne Terrace is a row of ten terraced cottages located north of Carrickmacross Road and parallel to the railway line and new station opposite. The cottages are listed as protected structures, with NIAH giving a construction date of c.1870. This cannot be correct as the GNRI was formed in 1876 and their original architectural plan, entitled ‘Design for Four Room Two-Storey Dwelling House’ was signed by Mills on 5 November 1901. It is also logical that these houses were built after the new station had been opened in 1894, in order to provide more railway staff accommodation. Also, prior to this, land in the Demesne and Townparks areas did not belong to the railway company, but to the Roden Estate, as evidenced by the ‘Plan Referred to’ document, signed by Mills and executors of the land sale dated 16 May 1889, in the Registry of Deeds: “A Memorial hereof was entered in the Registry of Deeds, Dublin, at 16 minutes after 3 o’clock on 2nd August 1889. And the execution hereof, and of said Memorial was duly proved”. The ‘plan’ clearly shows in red the areas which are to be purchased, with the areas either side of the existing tracks being recognisable as the sites for the new station and Demesne Terrace. 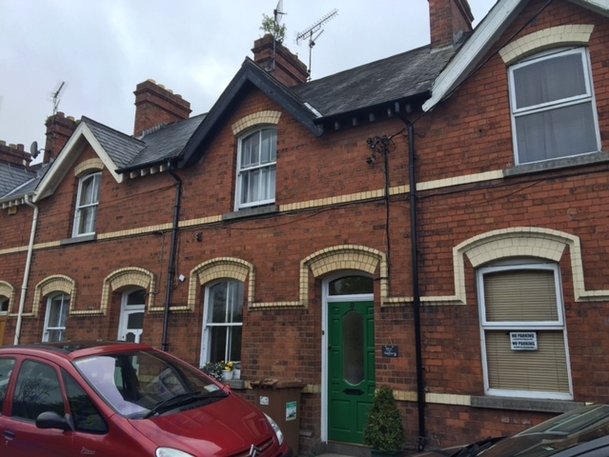 The detailed original drawings indicate that the houses on Demesne Terrace were to have three bedrooms; two upstairs and one downstairs to the front, left of the hallway. The hall led backwards to the kitchen, with an under-stairs pantry to the right and scullery to the rear left. The scullery had a door leading to the yard and adjoining coal shed. W.C. and ashes waste units were located in the left rear corner of the walled backyards, which were “coped with double bull nosed bricks set and bedded with cement”.

Built of red-brick, the houses use yellow-brick bonded windows and mouldings to echo those seen at the station and Ardee and Brook Street Terraces. The door hoods are not rounded like the earlier terraces, but rather match the gentle curve of the windows, also used at the new station. This architectural correlation is enhanced further by similar linear string coursing, for which “solid mitered bricks of the proper form to be specially ordered for the moulded hood course”. The frontage to the houses includes a gabled pitched roof over the first-storey central window.

The 1911 census does not list Demesne Terrace by name nor the Carrickmacross Road off which they are located, but deeper investigation suggests that it may have been included in the wider street census ‘Dundalk Rural/Demesne Rural’ with twenty houses. Occupants of numbers 1-10 have occupations relating directly to the running of the train station; this is likely to be the row of ten houses at Demesne Terrace. Occupants of numbers 11-20 are of higher professions, such as civil engineer and solicitor. A brief survey of the current road supports this, with houses 11-20 being grander detached houses.

The 1911 census also reveals that the majority of occupants surrounding the tracks were employed by the GNRI. This impacted on the urbanisation of the area, which had previously lay as agricultural land west of the main town. The GNRI as a company connected its employees across a spectrum of ages, professions and classes, whilst architecture, both industrial and domestic, segregated them. The occupants of the buildings define the identity of the site; it is they who provided the manpower to run the GNRI and their existence which necessitated the need for residential architecture.

The input of William Hemingway Mills and the development of his architectural taste can be witnessed through original drawings with his detailed notes, instructions and authoritative signature of approval. Some buildings were built to plan and retained their intended function throughout the GNRI’s operations, whilst others have several sequential drawings and physical alterations which changed their use. Analysis of the drawings alongside the buildings has not been undertaken before, and provides valuable insight into the site.

The GNRI buildings are a natural evolution of an existing place and domestic architecture provides another layer of architectural history to an established industrial town with a strong tradition of engineering ingenuity, and a strong sense of identity.

This article is adapted from the research paper, ‘Railway Architecture: The GNRI at Dundalk’, which details the architectural history of the GNRI and its impact on Dundalk including the engineering works and old and new train stations. It was awarded a distinction at Master’s level at Trinity College Dublin. A copy has been donated to Louth County Council, the TD for County Louth, the Dundalk Railway Society, and the Irish Railway Records Society. Thanks are due to the Dundalk Railway Society who assisted with this research: Margaret Mallon, Brendan McQuaid, Paul Lynch, Artie McManus, and Dundalk Station’s current Station Master, Anthony Monaghan.