Bush students to lead the way at Young Scientist Exhibition 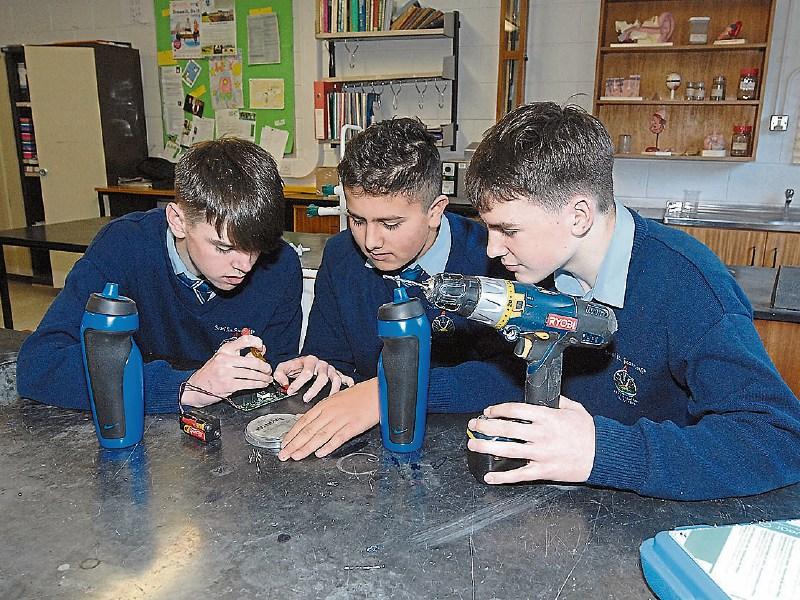 Three bright young men with sparkling futures are Peter Suresh, Oliver McGuinness and Barry Dunne who have invented a new product called, “Ultra Clean Caps”, which is a cooler bag that sterilises sports bottles, preventing the spread of unwanted pathogens from player to player.

Having successfully built the device, they tested the product on sports bottles from a football game and found that all germs were eradicated.

The boys had the opportunity to work in the labs in DKIT and shockingly found that the untreated bottle caps harboured such bacteria as streptococcus and E.coli.

The young men are very excited to share their results with the judges and the public in January at the RDS.

Effects of health tracking devices and wearable technology on the rates of peoples exercise is the title of the project carried out by scientists and students of Bush Post Primary, Gary Murphy, Brendan Woods and Ciaran Murphy.

These sport enthusiasts are monitoring the effects of health Apps found on phones and devices such as Fit-bits, which are all hugely popular at the moment, to see if they really do make a difference to people’s health and their motivation towards healthy living.

The results of this experiment will tell if a device, that can cost anything up to €300, will actually improve someone’s health or if it is just a waste of money.

TITLE: Are Ireland’s Children Stuck in The Mud?

Stefan Breen, Eoghan O’Connor and Shane McAvinney, of Bush Post Primary School’s TY Programme are carrying out an investigation to find out if there is a link between Nature Deficit and Obesity in Ireland’s children.

Nature Deficit can result in a disorder, whereby children who have not been spending enough time outdoors can develop a wide range of behavioural issues.

Through surveying Louth’s parents and developing a game used to detect Nature Deficit in their focus group of children, this team of aspiring social scientists are answering the question as to whether children who spend most of their free-play time indoors vs. outdoors are at a higher risk of obesity.

With their project, Oisín Arthurs and Doire Mullen are tackling the issue of “gateway drugs” – but in a way that has previously been overlooked.

They are trying to find out whether or not teenagers with a sugar addiction are more likely to become addicted to cigarettes when they reach adulthood.

Recent trends among today’s youth show that the diet eaten by the average teenager is becoming increasingly healthier.

Along with this trend, the number of young smokers in Ireland is reducing year upon year. These two students have ambitiously taken it upon themselves to scientifically investigate if a link exists between the two.

TITLE: The Impact of Same-Sex Marriage on Both Sides of the Border

“The Impact of Same-Sex Marriage on Both Sides of the Border” is the name of Evan Cronin and Ryan Duffy’s project.

In the BT Young Scientist Exhibition 2016, they had a project where they tried to predict an upswing or downswing in the economy due to the passing of the same-sex marriage referendum.

This year they are back, and with the help of a number of local business have collected the data needed to either confirm or disprove their predictions from last year.