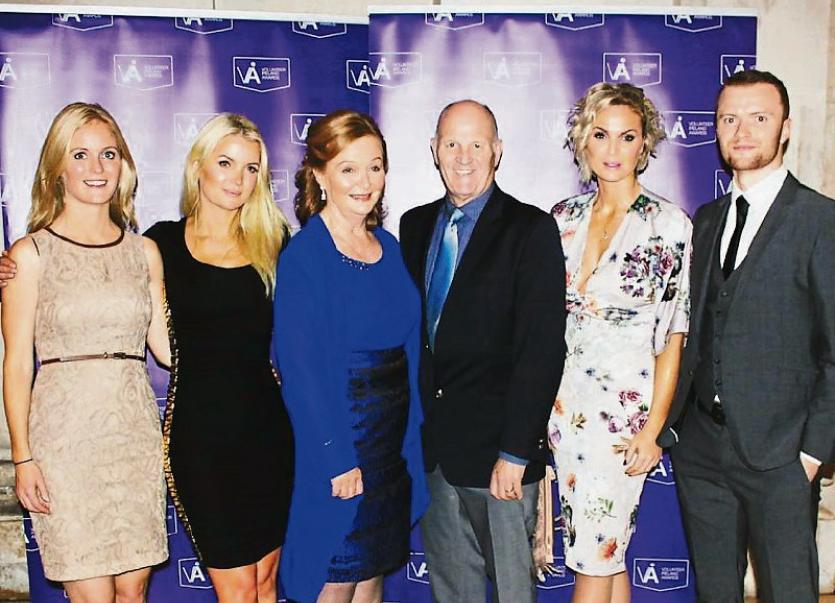 For Blackrock nurse Joan McAdam being nominated for person of the year at the Volunteer Ireland Awards  came as a surprise but, given the commitment she has shown to the local Defibrillator Group, and the lives that have been saved as a result, it was certainly well deserved,

“All my family came with me to the wonderful event in City Hall,” Joan told the Democrat.

“ I felt very humbled to have been nominated for Volunteer of the Year. It was a very emotional night when you heard all the stories from the 27 other nominees, there are some many amazing Volunteers in all our communities’.

Connor Murphy who nominated Joan tells a very personal story about Joan’s impact on his life.

“I was playing in a twice weekly football match in the local football club pitch Rock Celtic which is adjacent to the Community Centre where one of the public access defibrillator resides. At approx. 9.50pm that evening I went into cardiac arrest and collapsed. My team mates started CPR and the defibrillator was retrieved. After some 7 minutes I received a shock from the defibrillator and within a minute or so later I was revived just as the paramedics were arriving.

“The fact that that defibrillator was there was purely down to the work Joan has done down through the last six years and both myself my family and friends are so grateful to her for that. I was taken to the Mater hospital and received heart bypass surgery the following week. I was forty five years of age at the time with a wife and three young daughters.”

“Earlier that day, Joan had been doing her daily checks of the defibrillators in the parish when she noticed that the one at the community centre was displaying a warning sound and needed to send back to the manufacturer for repair. The process is that a replacement defibrillator would be sent within 24 hours. So Joan removed the defibrillator and put up a sign to say it was out of order. This was at lunch time on April 19th. Later that afternoon while Joan was at home she felt that there would be a greater footfall of people at the community centre than at the Dublin road (where another of the defibrillators was positioned).

“Joan herself left her house and moved the working defibrillator to the community centre where it was then used on me some 4 hours later. Even as I type this story it still makes the hair stand up on the back of my neck.

“A series of decisions made by this remarkable woman which has led to saving my life and in so doing providing my family with a father/husband for the years ahead.”

More in Round the Rock in this week’s Dundalk Democrat.

Keep up to date with all the latest Dundalk news with the dundalkdemocrat.ie