Heartbreak in the Holy Land for Dundalk 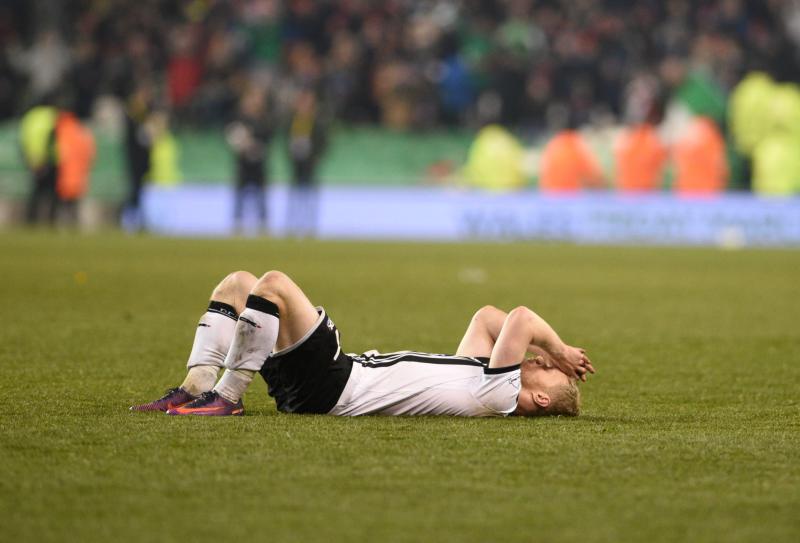 Dundalk’s hopes of progressing to the Europa League knockout stages were shattered in Israel on Thursday night.

Stephen Kenny’s men slumped to a 2-1 defeat while AZ Alkmaar’s 3-2 win over Zenit St Petersburg made the result in Netanya academic anyway, the Dutch side joining Zenit in the Last 32.

Daryl Horgan and Andy Boyle were almost certainly wearing a Dundalk shirt for the last time. Both players have been heavily linked with a move to English Championship club Preston North End in the coming weeks.

Maccabi must have thought that Christmas came early as Dundalk gifted them side both of their goals.

Brian Gartland’s mistake in the 20th minute resulted in Haris Medunjanin being taken down by Gary Rogers and Tal Ben Chaim converted the penalty.

Dundalk pulled level six minutes later when Chris Shields delivered a sensational ball across the face of goal that was turned into his own net by Eli Dasa.

The game was evenly balanced at this stage but Dundalk were punished for more criminal defending seven minutes before the break.

Shields was hounded in possession by Eyal Golasa, allowing Vidar Orn Kjartansson to feed Tal Ben Chaim. He cut in, unopposed, and found Dor Miha whose shot squirmed horribly through Rogers' hands to put the natives back in front.

Kenny’s side went down fighting and David McMillan should have equalised in the 87th minute when he was picked out by Horgan but the Lilywhites top scorer couldn’t get his shot away.

Substitute Ciaran Kilduff missed an even better chance in stoppage time, meeting a Horgan corner at the near post only to somehow head the ball wide of the target from close to six yards.

Dundalk’s night was compounded when the team’s chartered flight missed its departure slot from Ben Gurion airport on Thursday night.

The travelling party had to stay in the Israeli capital last night and are not expected to return home, via Sofia, until 4pm today.