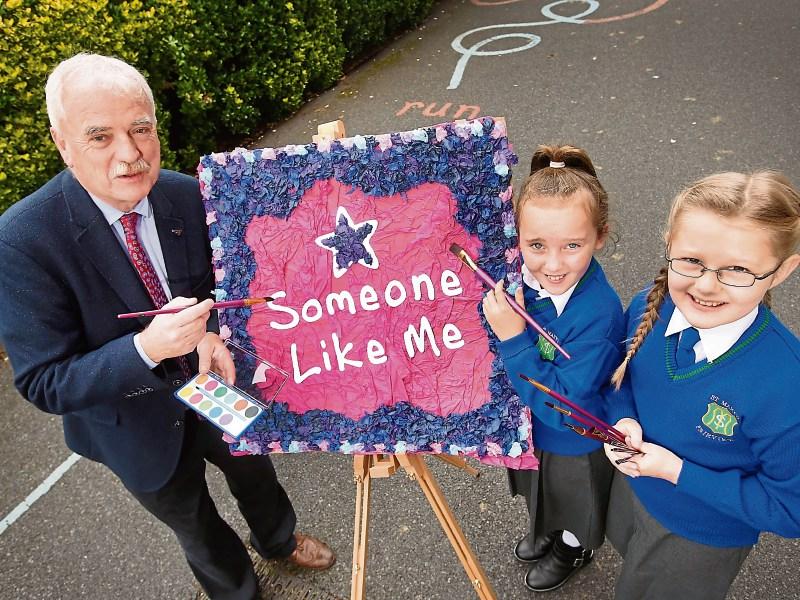 Two Louth national schools are in a celebratory mood this week as the judges of a prestigious national art competition named them junior and senior county winners, placing them in the running for the coveted national title.

The competition, which is entitled “Someone Like Me”, is sponsored by the Department of Justice and Equality.

It aims to develop children’s understanding of disabilities and to promote the celebration of the aspects that make them and their classmates unique.

And, the artistic efforts of pupils and teachers at Scoil Mhuire Na Ngael, Dundalk and Bellurgan National School, Dundalk have paid off as their imaginative “Someone Like Me” submissions were singled out by the competition’s judges - Sinéad Burke, Padraig Naughton and Beth O’Halloran - for being exceptionally insightful and inspirational.

Having invited Paralympian Eve McCrystal to the school, the pupils created a large mural which was about looking beyond disability and including everyone in games and activities.

Ultimately, it was about demonstrating that “every person is special”.

The entry from Bellurgan National School, Dundalk, named as Senior County Winner, was created by 5th Class pupils Amy Donohue, Megan Doris, Niamh Rice, Charlotte Mannion and Shauna Rice with teacher Aine Byrne. The judges felt that their clay model perfectly represented their theme of “everyone is equal and everyone is the same”.

Both schools now go on to compete with 49 other schools from around the country for the overall national “Someone Like Me” award which will be announced by the Minister for State with special responsibility for Disabilities, Finian McGrath T.D. at a ceremony at Farmleigh on Monday 12th December 2016.

Congratulating both schools on becoming county winners, Minister of State with special responsibility for Disabilities, Finian McGrath T.D. said that he was hugely encouraged by the number of competition entries.

“This year we received almost 2,000 entries from all 26 counties which means that teachers and pupils right across the country have taken the time to think carefully about the similarities that exist between all people and to foster more positive attitudes towards people with a disability,” he said.

“Having met to choose the county winners, the judges now have a difficult task ahead of them in order to decide which of the 51 junior and senior entries will win the national title.

“I look forward to meeting all of the pupils and their teachers at Farmleigh in December and announcing the judges’ decision.

“While I know that it will be an anxious wait for the pupils and teachers to hear which of the 51 entries has been awarded the national title, we should not forget that the real winners in this competition are the future generation of adults who will have developed a better understanding of disability and who will have, in turn, formed more positive attitudes so that everyone, irrespective of ability or disability, feels a valued member of society.”

The competition, which offers a range of prizes up to the value of €750 was open to all primary school pupils from junior infants to sixth class and almost 2,000 entries were received from individual pupils, class groups and whole schools right across Ireland.

Entries ranged from posters and collages to large sculptural installations and multi-media pieces.

The 51 schools named as county winners have been invited to attend a special event at Farmleigh on Monday 12th December, at which the national winner will be announced.

This event will be hosted by the Minister of State with special responsibility for Disabilities, Finian McGrath T.D. and the master of ceremonies and special speaker will be the highly acclaimed blogger, PhD candidate and writer Sinéad Burke (Minnie Melange).