They all know where the Town is now, says Stephen 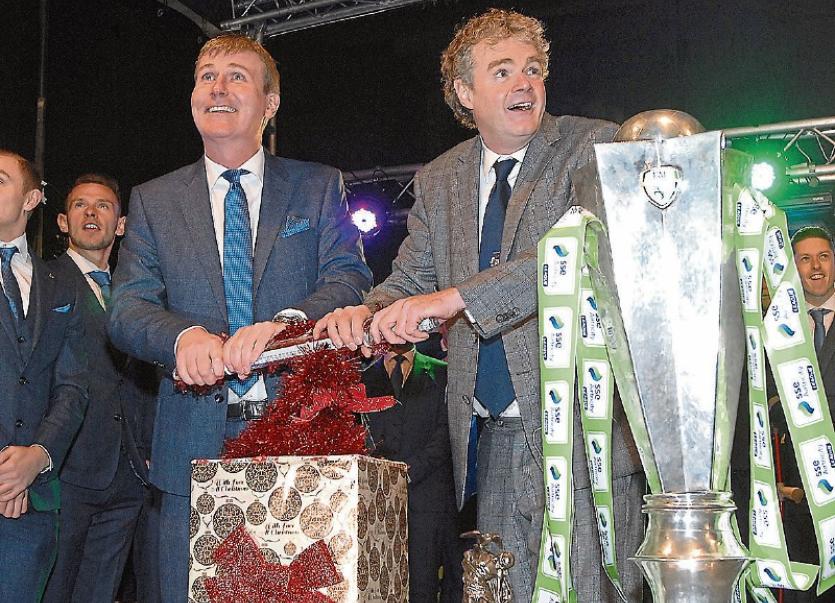 A large crowd gathered at The Square on Saturday evening for the public and civic reception in honour of Dundalk FC who have brought such honour to the town.

The players came out onto the stage as they were announced one-by-one to tremendous cheers and applause.

Dressed immaculately, they are indeed great ambassadors for the town.

Then all the backroom staff at Dundalk FC were introduced, for this was an honour for all the men and women at Dundalk FC.

The new state-of-the-art lights came on in Clanbrassil Street, Earl Street and Park Street and they are just magnificent.

Tom said the last time he saw such a turnout for a reception at the Square was twenty years ago when President and Hillary Clinton came to Dundalk.

It was an honour for him to be on the stage with this team who had brought such joy to the town.

“Tonight is the business community's chance to say thank you.”

Martin Connolly thanked the municipal district committee for the civic reception, and Dundalk BIDS and Dundalk Chamber of Commerce for the award and he said the club had come a long way from being on the brink of extinction.

He thanked everyone at the club, who had pulled together, the magnificent players and management team.

He thanked the club’s dedicated group of volunteers.

Chairman of Dundalk Municipal District, Cllr Mark Dearey, said that as public representatives “we treasure what you have done to the town”.

He recalled going to Oriel Park when he was growing up and the great names and the great European ties against FC Eindhoven, Spurs and Celtic, but he also recalled that things were not always great.

“There were dark enough times in Dundalk,” he said, “but the club was always something we always held dear.”

He also paid tribute to the late Sean Bellew, former Dundalk Town Councillor and a great Dundalk FC supporter, a tribute that was met with a warm and dignified applause by the people gathered at The Square and the players and staff of Dundalk FC.

“Sean text me there about a week ago,” he said, “about an encounter he had with some Spurs fans, how he walked away with great pride because they recognised what these men standing behind me had achieved.

“Sean felt an intense sense of pride and belonging to what had happened.

“I knew him too as a politician. We are going to miss Sean and we are going to do our best for him as well. May he rest in peace.”

He then made a presentation of a Cuchulainn statuette to the club from the members of Dundalk Municipal District members.

Then it was the turn of Dundalk FC manager Stephen Kenny who said that since he took over four years ago he, and all the players and all the staff at Dundalk FC, have had nothing but kindness and decency from everyone in Dundalk.

And he thanked the people of Dundalk for that.

“They know exactly where it is now. It’s a town in its own right.”

He pointed out that this team had won one league title, which is something else.

Then two, which had never been done before in Dundalk, and then three, and into the Europa League, and have had to play such a gruelling schedule, they had to put their bodies on the line every two or three days for months and months.

“They have carried themselves brilliantly,” he said of his players. “Let’s hear a big cheer for this group of players.”

And what a cheer it was.

“What this team has done has been incredible. A great inspiration to all the young people of Dundalk for the next generation.

“For us, we still have Israel to come next week. Hopefully we can go and do it next week and get through.”

Finally Stephen O’Donnell came forward and once again lifted the Airtricity League trophy to the delight of all.

A great and proud evening for the Town.

Michael Duffy, the voice of Oriel, was MC, and what a brilliant job he did.

A scroll was presnted to the team in the Town Hall afterwards.